Weathering the road to local minstrelsy

Music lovers may have seen Wilson Marks playing around Austin with artists such as the Love Leighs, J. Wagner, or the Jitterbug Vipers. He crafts a sound reminiscent of Forties jazz. Marks releases his new LP What Was Made for Weathering tonight at Strange Brew, 8pm.

Marks grew up in Boerne outside of San Antonio.

“My mother was an amazing woman,” he says. “She worked in document forensics until an aneurysm [temporarily] stripped her of her nouns among other things. She then learned to play harp, and was active in music therapy and hospice care until she died in a whitewater rafting accident.

“My father was in the Air Force until he began flying planes and helicopters, and doing drug interdiction for U.S. Customs. They met in a music appreciation class in college over recorders. He was singing barber shop at Disney World at the time.

“That sounds surreal to even me.”

If you’ve ever seen Marks sing and play guitar – he was born with two thumbs on his left hand – you’ll witness the soul expressed in his music. This is a man inspired by spicy food, kids, and yes, traffic.

“Honestly, that time when I’m sitting in my car forced to do nothing but stare at the bumper in front of me might be the stillest and calmest moment of my day,” he laughs. “That moment is a percolator. From there, sometimes a line or melody will come. I’ll sing it into my phone and revisit it later, and sometimes these germs grow.

“Interesting harmonies inspire me, furry notes, and chords. Feelings I don’t know what to do with otherwise. When I was younger, it was probably hormones and neurochemicals and a desire for connection with others. As I got older and busier as I started teaching, it became self-imposed deadlines and topics.

“This last batch of tunes from the album is autobiographical in nature and was just marginally cheaper than therapy after my marriage fell apart. Music has been a compulsion. My great uncle was a guitar maker in Canada, and I got handed down an old box he made when I was 11.

“Some Michael Hedges recordings and a concert by finger-style guitarist Phil Keaggy opened my ears to other possibilities. Django Reinhardt led way to Barney Kessel and others. I went back to college after a hiatus and studied jazz in New Orleans. Some of that aesthetic and harmonic language seeped into the songs.”

“We live tracked the voice, guitar, bass, and drums, and a few atmospherics were added after the fact, but it’s a pretty raw overall,” says the bandleader.

Marks became friends and a protégé of Austin jazz elder Slim Richey when he was in his teens.

“Slim Richey is a hero who became a friend. I met him at the Kerrville Folk Festival. He slipped me a Poll Winners album and that might as well have been heroin.

“I’d go hang out at his camp. He’d tolerate and even encourage my swing guitar aspirations. He was a patient encyclopedia of standards. He’d call changes and periodically shoot me a smile and say, ‘Yeah man!’ even if I was butchering the tune.

“Slim has influenced so many people in town. He let me borrow his guitar when mine was stolen and I ended up buying it from him. It’s a 1951 Epiphone Zephyr Regent.”

Fatherhood has had a profound influence on Marks.

“I’ve got a 9-year-old daughter and a 4-year-old son,” he beams. “They’re both my lights and the perfect excuse and vehicles for periodic bursts of irreverence and absurdity. If they don’t instigate an adventure, they’re usually game for the ride.

“Hopefully that playfulness has wormed its way into my musical language in some ways.

“Being a parent, paradoxically, has given me both less time to pursue creative endeavors, and enabled and taught me how to do it more mindfully and efficiently when I do have that time. My kids grew me up in a lot of ways.” 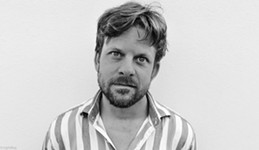