Irish balladeer calls to the wretched and joyful

An ear-splitting chorus of shrieks signaled Hozier’s arrival onstage at a sold-out Austin Music Hall on Tuesday night. The welcome provided a census for the 25-year-old Irishman’s first local concert since SXSW last year: 80% women and 20% their boyfriends. 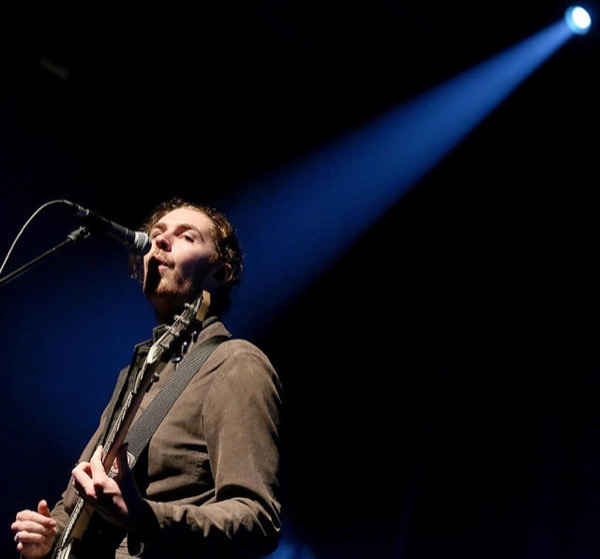 His cathedral pipes commenced with the righteous poetry of “Angel of Small Death and the Codeine Scene”:

“I watch the work of my kin, bold and boyful, toying somewhere between love and abuse. Calling to join them, the wretched and joyful, shaking the wings of their terrible youth.”

Fronting a sevenpiece band that gave prominence to his cellist and backup vocalists, the budding star justified his soulful, coffee-shop rock’s expansion into big halls, commanding a sound with twice the heft of his studio work.

“It’s been too long. I was meant to be here late last year but I fell ill,” he announced, referencing his ACL Fest no-show before leading a mass sing-along of breakup ballad “Someone New.”

It was grandiose in comparison to a puny opening set by Icelandic/American act Low Roar, which should have sold sleeping bags at its merch table to accommodate the tranquilizing effect of shadowy, electro-imbued post-rock. A somnambulant version of Radiohead might be a useful reference point for “Slow Bore,” but it doesn’t reflect how excruciatingly underwritten their songs were. When minimalist lighting design is the most exciting part of your live show, you’re failing at music’s most crucial element: communication.

And in moments, Hozier’s communication broke down as well, turning to babble on “To Be Alone,” which, on account of its “ooh-ooh” hook and bluesy guitar, resembled a half-assed Jack White song. He never lost a speck of the audience’s attention, however, even during the set list’s acoustic portion. If anything, that segment provided transcendence.

Duetting with Belfast singer-songwriter Alana Henderson, who set down her cello to steal the spotlight as a vocalist, Hozier captivated the audience with “In a Week.” The sinuous folk song about finding bodies in the hills of his native Wicklow County was a moment of grace with ancient wordplay and breathy vocals. Ramping back up with the full band, Hozier’s somewhat formulaic succession of mid-tempo rock songs with wordy hooks was spelled by R&B-influenced pop single “Sedated.”

As his audience of Taylor Swift lookalikes shouted along to the powerhouse chorus, the lanky songwriter inhaled the audience’s energy rather than putting forth much of his own, a practice he continued throughout closer “Take Me To Church.” Compared to what the world witnessed during this year’s Grammys telecast, Hozier’s performance of the mega hit was underwhelming. That would’ve been a clumsy exit had he not returned for a long encore highlighted with an acoustic performance of live favorite “Cherry Wine.”