A second musical six-pack reps our scene at international fests 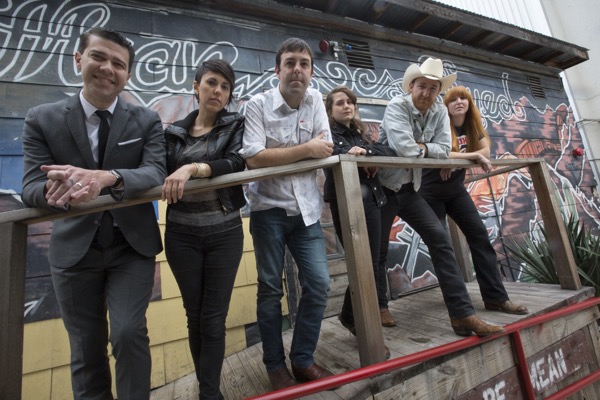 “It’s really about who’s worked hard this past year, and who’s going to keep people’s attention as we go, because they’ll be performing solo,” said ATX6 organizer Chris Brecht. “I like a good mix of diversity, both personally and musically. We have an eclectic music scene, and you want to take that into consideration. You look for balance, and I think we found a really good mix of chaos and peace, young and old.”

Gathering at the Mean Eyed Cat yesterday for a photo shoot with the Chronicle, most of the artists were meeting for the first time, and there was an excitement and camaraderie among the group as they plotted potential opportunities. Fostering the sense of community among a diverse spectrum of artists is important for Brecht, not only for the showcases they’ll be playing over the next year, but also for extending the connections in the music scene here at home.

The group heads to Toronto for NXNE next month, and like last year, plans to attend the Reeperbahn Festival in Germany this September and showcase at next year’s South By Southwest. Brecht is also looking at adding other potential international festivals as the program becomes more formal and builds on the 2014 experience.

“I would definitely say it was a leap of faith [last year],” acknowledges Brecht. “None of us had any idea what was going to happen. But because we went through so much together, it was like we grew in appreciation for sitting there watching each other play, to appreciate it and get rid of any sense of competition. Everybody’s rooting for everybody.”

The ATX6 sprung from a conversation between Brecht and Music Canada’s VP of Public Affairs, Amy Terrill, at SXSW 2014, and was hastily organized to send the initial group to showcase at NXNE. The project received initial funding support from a number of local businesses, including venues the White Horse, ABGB, Holy Mountain, Bangers, Blackheart, and Strange Brew. Following the success in Canada, SXSW and the city stepped in to help fund the group’s European trip.

Brecht is looking to raise more than last year’s $22,000 to better support the group as they embark on tour and expand efforts for this year. For most of the artists, it will be their first opportunity to tour Europe.

“I had heard about the ATX6 last year from Carson, and she said it was really rad,” said Terrell. “Everything about it is appealing. I’ve never been to Toronto, and just to be able to play a new market is exciting.”