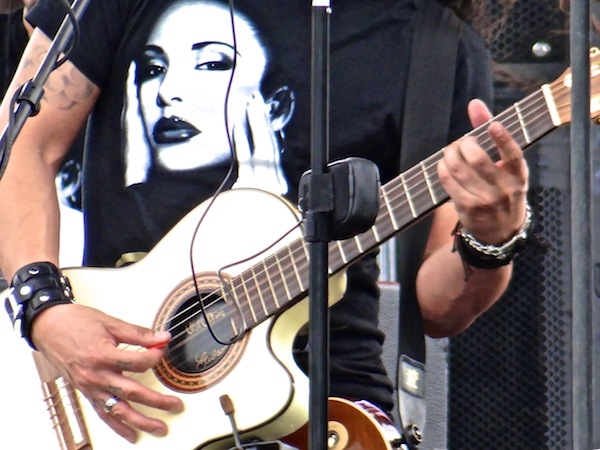 The heavens opening up and pouring forth a deluge couldn't keep the over 50,000 Latin music fans and Selena devotees from filling North Bayshore Park in Corpus Christi this weekend for the first-ever Fiesta de la Flor music festival. 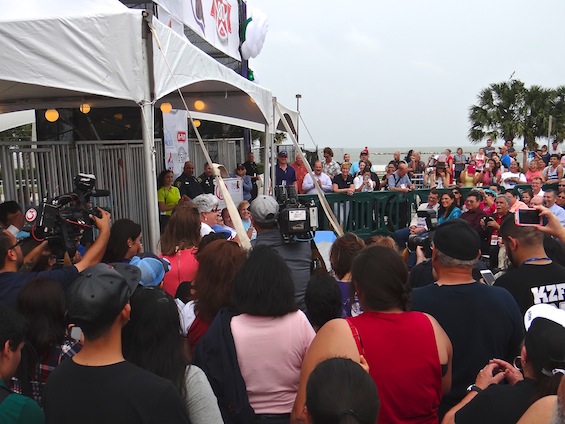 Friday evening, in fact, closed early due to threatening weather, as heat lightning danced across the night sky over the festivities. Friday headliners, Los Lobos were mid-set when the city's mayor called it. The band had just welcomed special guest musicians, noted master of the bajo sexto Max Baca with accordionist (and nephew) Josh Baca, then launched into the evening's finale, "La Bamba," to one hell of a lightshow, courtesy of mother nature. 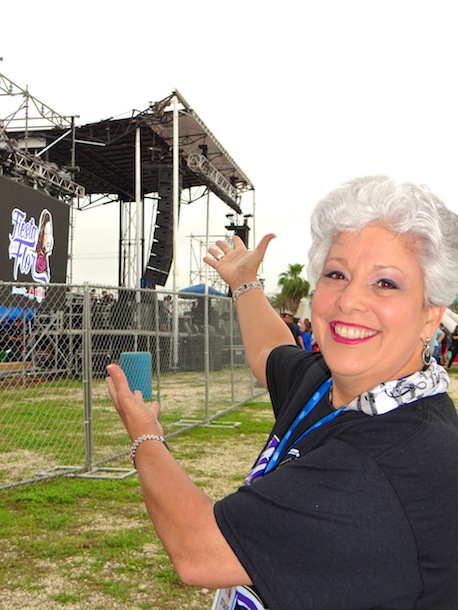 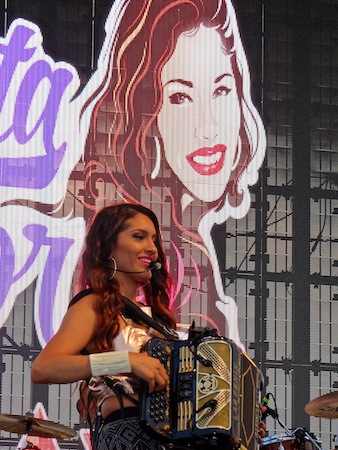 Earlier that afternoon, a clustered audience of about 500 watched as dignitaries, including Corpus Christi Mayor Nelda Martinez and the Quintanilla family cut the ribbon on the inaugural festival and opened the gates at 5:30pm to a crowd of thousands that had begun forming in the early morning hours and wrapped around the block. 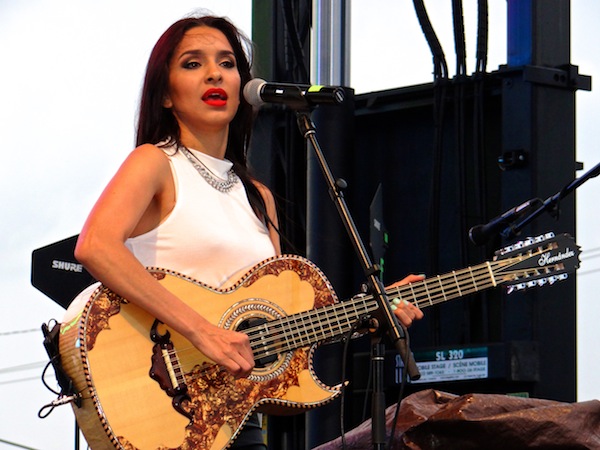 Lesli Rodriquez, 22, of Las Fenix jams out on the bajo quinto (photo by KXM) 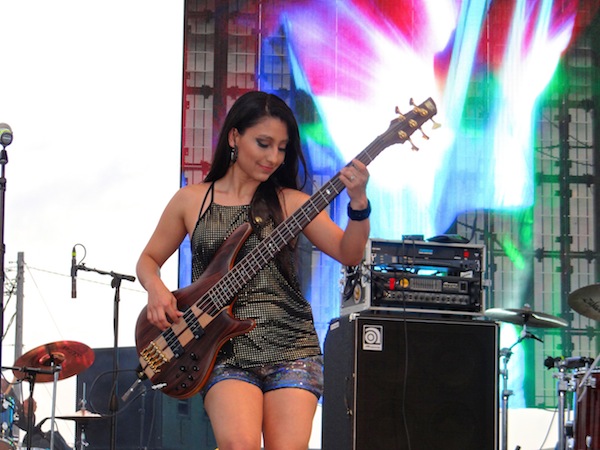 The crowd reacted warmly to CC homeboys and festival openers Steven James & the Jaded. Houston sister act, Las Fenix grabbed the crowd with a charmingly choreographed take on the staccato "washing machine" standard "El Tao Tao" and kept them rapt and happy during their set of Latin covers, including the party-starter "Juana la Cubana." 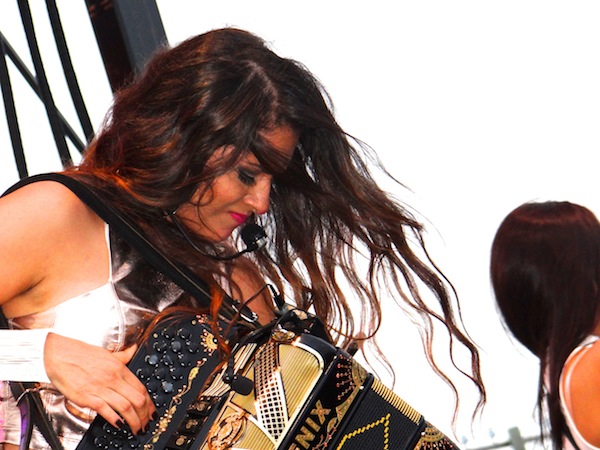 Their manager, David Rodriguez, who also happens to be the pop of this family of young musicians, loomed backstage like another familiar father-manager in the house. The group recorded an album in 2013 at Q Productions studios in Corpus Christi, and earlier this year, Selena dad and manager Abraham Quintanilla was quoted in the San Antonio Express News about the quintet: “Who can carry them better than the father, verdad (right)? He’s looking out for them in every aspect. I think they’re going to go a long way.” 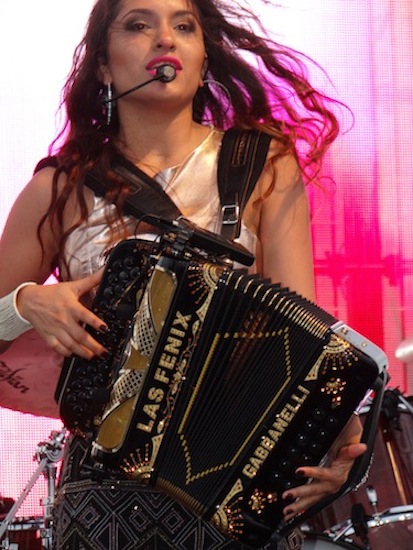 On Saturday, before the gates opened, the crowd had swelled, partly due to the Selena-fever stoked by the news of the first night's success, and partly due to news of 2,000 additional tickets made available the morning of to quell the masses frustrated that the fest had sold-out. News outlets from across the Americas (and beyond) prowled the perimeter stopping every young person who remotely resembled the beloved singer to take pics, shoot video, and get quotes. 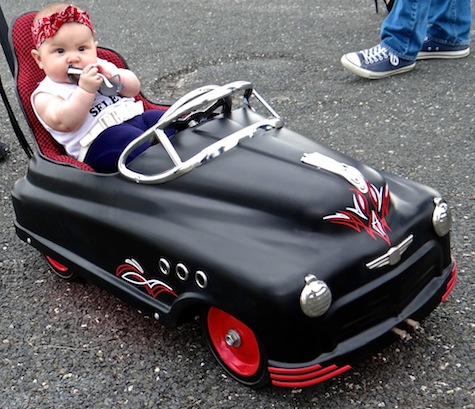 One little tot who got a lot of attention cruised the grounds in style – low low style – in a fierce flat-black low-rider kiddie car which her dad, Rudy Lopez, according to the Corpus Christi Caller-Times, concocted out of a "peddle car and compressed air tanks." Yes, that sucker actually bounced. And that kid repped. (Her shirt, by the way, says – what else? – "Anything for Selenas.")

Austinite Stephanie Bergara, lead singer of Bidi Bidi Banda, our local Selena-tribute band, ran into one of her idols on the grounds, Rebecca Lee Meza, who portrayed young Selena in Gregory Nava's Selena (in which J-Lo played grown Selena). Bergara shared this selfie on Facebook. 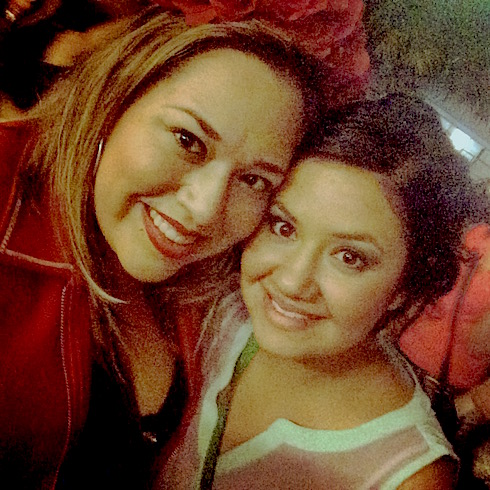 Local CC girls rock camp, Chicas Rock kicked off Saturday with punkified versions of Selena songs and other poppy 2-, 3-, 4-chord rockers. Then NBC's The Voice contestant, Corpus Christi homegirl, and Chicas Rock supporter/mentor Clarissa Serna took the stage like a panther and belted out her own numbers to work the crowd up. 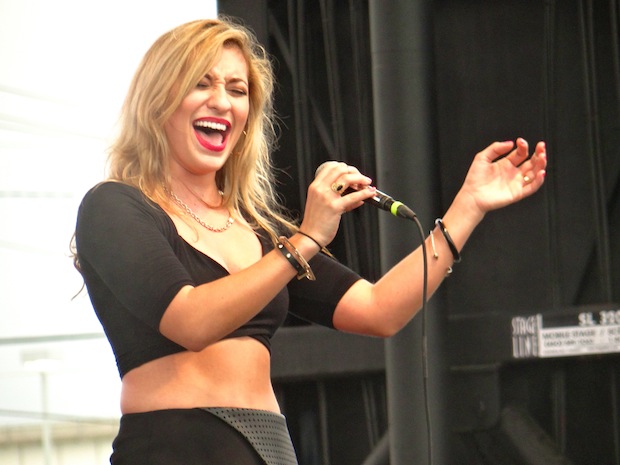 Clarissa Serna, of NBC's The Voice gets the Saturday crowd riled up (photo by KXM)

Austin-favorite, Nina Diaz took the crowd into brooding rock turf as storm clouds roiled overhead. Observant fan-types might've noticed band members from the group that launched her, Girl in a Coma, in the crowd during her set. Dark matter amassed overhead as Diaz wailed. The smoky singer whipped out an amazing version of Selena's "Techno Cumbia" to wrap the set. 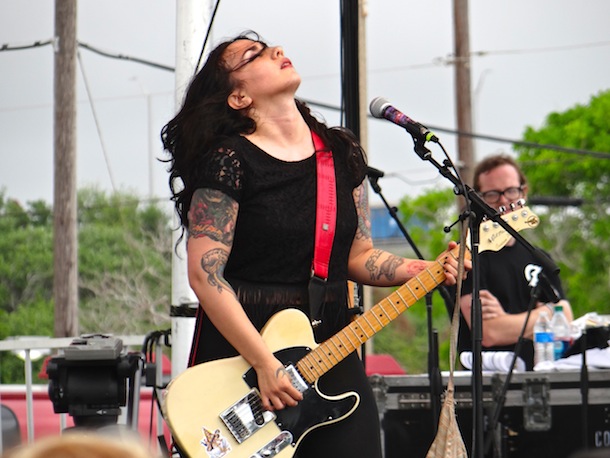 We're not going to lie: When the heavens opened on Saturday, we took refuge and lunch outside of the fest. Downtown Corpus Christi was packed with party revelers seeking shelter as rain pummeled makeshift ponchos and umbrellas bowing in the wind. But everyone was in such a great mood, it didn't really matter. Some sought respite from the storm in the American Bank Center, but many loyal fans stayed for Stephanie Montiel's set, as the show soldiered on. The fest was closed for a short bit, but reopened in time for Chris Pérez Project, featuring the widower of the late singer on lead guitar. The few days of overcast suddenly took a turn, and as Selena's beloved began to arrange his guitars, the sun peeked out from behind the clouds, then lit up the remainder of the day. The significance of this was not lost on the crowd which murmured in awe as smatterings of applause broke out in different sections. When the shy and curly-maned Pérez hit the stage, that was it. The crowd doubled and stayed that way for the rest of the night, which featured Jay Perez & Band, Los Palominos, A.B. & Los Kumbia Kings, and Little Joe y La Familia and delighted the crowd with a majestic fireworks display as grand finale. 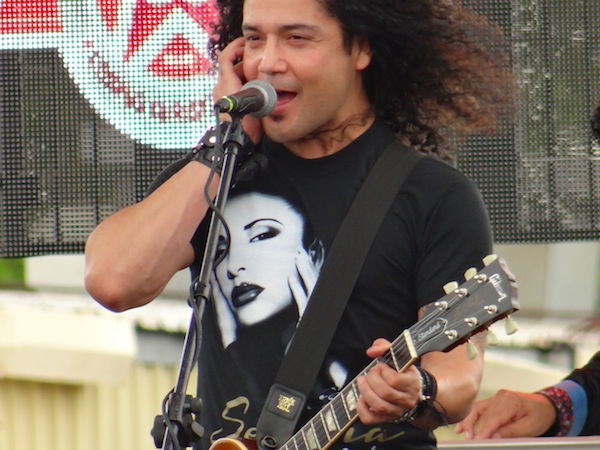 The next day, festival presenters, the Corpus Christi CVB announced that Fiesta de la Flor would indeed become an annual event, with next year's fest scheduled for May 6-7. 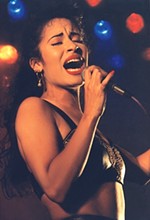 Austin Honors Selena
Remembering Preciosa in CenTex and beyond 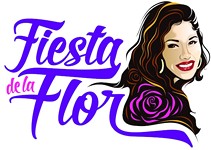