Joe Strummer famously asserted that if the Clash had taken an extended break the way contemporary bands do, then they might have survived. Taping its first Austin City Limits episode Wednesday night, Washington State trio Sleater-Kinney split its atom anew after a decade-long layoff, releasing a surge of energy as fearsome as it was emphatic. 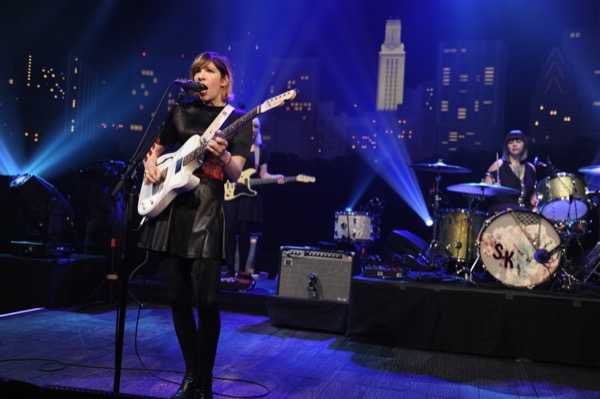 Portlandia: Carrie Brownstein (l) and Janet Weiss (r) taping Austin City Limits 4.15.15. “It’s similar, right?” asked the former. “A little bit – Austin and Portland? In ways we don’t like, even,” she added with a laugh. (Photo by Scott Newton Courtesy of KLRU-TV)

As Weiss pounded the power trio to life, opener “Price Tag,” the rat race regret igniting January comeback No Cities to Love, the studio’s arctic AC matched the cold fusion onstage. Its album rejoinder, “Fangless,” followed, and midway through, the gears locked into place – Tucker and Brownstein trading vocals and harmonizing as if a sole voice. No familial tandem can touch Sleater-Kinney’s frontline.

By the clean-up spot, “What’s Mine is Yours,” Tucker’s clarion vox boomed its trademark force of nature – shrill, primal, final. The hair on your arms, neck, and tongue jumps mile high anywhere within earshot of Tucker’s howl. Janis Joplin’s eyeglasses would’ve shattered in the face of that banshee wail.

Tucker also plays a demon low-end through an octave pedal on her guitar that’s then routed through a bass amp.

“This song’s definitely not about Austin,” joked Brownstein via introduction of the title track to the new album, which she later revealed had been partially birthed in Austin while referencing her day job on Portlandia. As clear a career single as “No Cities to Love,” its LP mate “A New Wave” jingled next even catchier. Ann and Nancy Wilson, eat your hearts out. 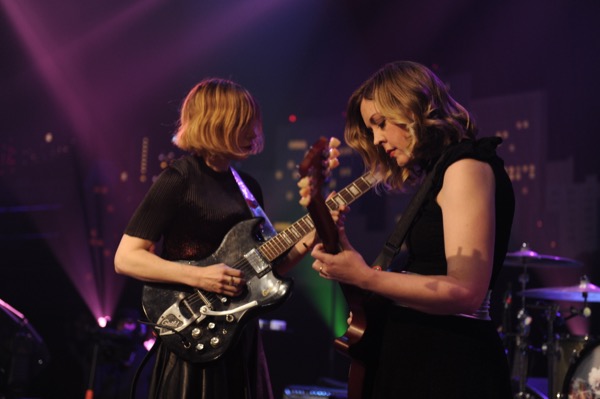 “Turn It On” kept jolting Tucker’s shoulders, shock waves of uptempo driven by Weiss, who was by now splintering her kit. The drummer’s as close as modern rock ever came to John Bonham, which makes Tucker Robert Plant, and Brownstein Angus Young, shaking bang and bounce from her Gibson SG. At points, the two guitarists would face off, and their undulations at each other assumed a tribal thrust both physical and aural. Weiss’ surf fills approached rolling thunder.

Brownstein barking out “Entertain” set up main set closer “Jumpers,” which began with her and Tucker at their mics like some French New Wave film classic – feminine ideals of power and charisma. After that, the encore felt completely unnecessary. “Modern Girl,” from No Cities to Love predecessor The Woods – swan song no more, yet every bit as savage and supreme today as it was in 2005 – lent a girlish close to the 80-minute performance.

Sleater-Kinney, hammer of the gods.