Brit-punk siren on her band’s new documentary and longevity

Revenge of the Mekons, a jubilant biopic on what could arguably be the longest-running of all bands that emerged in the British punk explosion of 1977, encores its SXSW Film screenings last month this Saturday – April 18 – at the Marchesa Theater, 8pm. Director Joe Angio, and bandleaders Jon Langford and Sally Timms will be in attendance for a Q&A afterward. 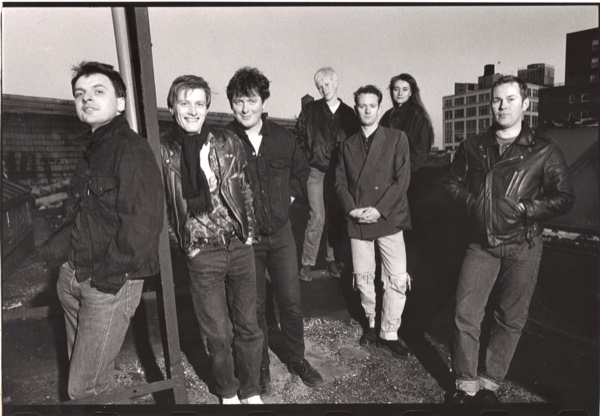 Geezerville: Revealed in the film is the fact that you have a day job.

Sally Timms: I’ve always had a day job, the whole time. I’m so glad I have a day job. For one thing, we don’t make enough money from music to live on. I would be destitute otherwise. I love that I have this other world and don’t have to worry about that.

ST: I’m a paralegal. But I’ve had many, many diverse jobs that allowed me to take time off. It’s been a mixed bag of bizarre occupations, but I’ve always done office-type jobs.

This job I’ve had for 17 years. There are people in the band who make money from art. Jon does, and Susie [Honeyman] makes money from playing music. Lu [Edmonds] was making a living from making music and he lives in Siberia.

G: In the movie, a guy from one of the labels the band was on, Touch & Go, reveals the Mekons would sell 8,000 album. How could you make a living off that?

ST: And that was a long time ago! We’re not close to anything like that now. Who sells records? Not bands like us. If it had been about money, we’d have split up a long time ago. We’re a large band who live on different continents. We’re not an easy band to move around and it’s expensive. We have to work out how to do that. For us, it’s always an expensive undertaking just to get together.

G: How does the band feel about the documentary?

ST: Now that I’ve seen it four times, I feel much more peaceful about it. I found it tough personally, because if you do something for a long time it’s very difficult to see it distilled into two hours. What’s interesting to me is other people’s reactions to it that were very different from mine. I have to say it exists outside of me.

Now, I’m actually glad we did it. I don’t think it does us any harm. I’m glad it brings attention to us. We’ve always been forward thinking and we keep doing things. We’re doing less these days, because we’re getting older and the financial part of it makes it harder than it used to be for a band of our level.

It’s one person’s story of what we are. People find it interesting. It’s informative. There are parts where I just sit there going, ‘Oh God, fat, thin, thinner, fat.’ I watch my weight. Within the band there’s a range of opinions, but we’ve all accepted it and we’re glad it exists.

G: How long it take to make?

ST: It went on longer than I anticipated. I think it started in 2006.

G: What makes the film complete is the inclusion of Mekons from every era of the band.

ST: It’s a big crew. I started in 1983 and the band that exists now came together in the mid Eighties. If you were in the band and wanted to return in some manner, it would be considered and probably accommodated in some fashion.

G: And it’s stressed that success, whatever that means, is never the reason the band exists. It’s the music making that’s primary, and the reason for the group’s longevity.

ST: It’s not to do with any financial considerations, or anything other than artistic and social ideals. As long as that holds good, we can continue to make things. If for some reason we couldn’t, we would stop. But I don’t see when that would be. We like each other and we like getting together.

We’re doing it to do it. That’s the origin tenet of punk rock and it even goes back to the folk tradition of people getting together to make things. They don’t necessarily make them for a wider audience. They can, and there’s limits on how wide that audience can be.

But it’s tied up with the social and the desire to create and how do you create a community out of that. That’s what drives what we do.