Live Review: The War On Drugs

“Hey there, Austin!” greeted War On Drugs frontman Adam Granduciel, positioning himself before a multitude of perfectly-placed effects pedals as the Philadelphian sextet took the stage at the Moody Theater on Monday night. 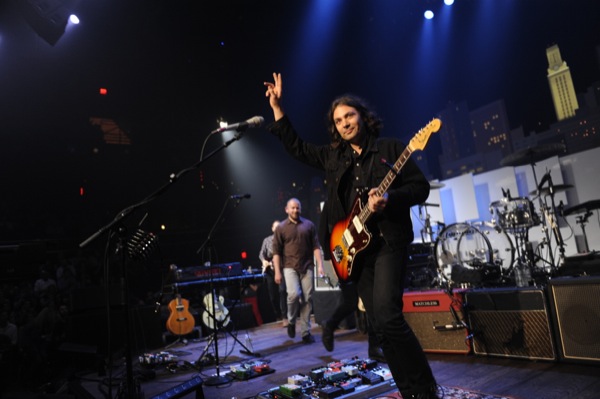 Kickstarting their Austin City Limits debut with “Under the Pressure,” a highlight from 2014’s Lost In the Dream, the psych rockers’ 70-minute set brought back memories of last month’s South By Southwest gig, revisiting 2011’s Slave Ambient with “Baby Missiles,” while coolly channeling Bob Seger via “Arms Like Boulders,” from 2008’s Wagonwheel Blues.

“Thanks for having us at the legendary Austin City Limits,” said the black denim-clad vocalist prior to unleashing a string of Dream cuts including “Burning” and “Eyes to the Wind,” the latter bursting with an extended piano intro and an awe-inspiring guitar solo from Granduciel.

Barely botching the opening notes of “An Ocean in Between the Waves,” the leader laughed, cueing his band to regroup.

“The beauty of all this,” he said, acknowledging the rolling cameras, “Is you can fuck up, and no one will know.”

“I finally get warmed up, and it’s almost over!”