The seal of the Paper Tiger

According to Transmission partner Graham Williams, his company will handle the routing of road shows to Paper Tiger, which opened last month in the space once occupied by venerated music club the White Rabbit, while San Antonio blogger and DIY show producer Ryan Brummett will curate locals and underground acts. Paper Tiger’s layout includes two stages: one large, one intimate.

This is the latest in a triptych of sweet opportunities seized by TE over six months. In October, the Austin company expanded into Dallas when it absorbed Tactics Productions. Transmission Dallas now regularly books concerts in Big D venues Club Dada, Trees, Three Links, and Sons of Hermann Hall. More recently, Transmission partnered with Austin Psych Fest producers the Reverberation Appreciation Society to help put on the spring outing, now called Levitation, which runs May 8-10 on Carson Creek Ranch. With its immersion into Paper Tiger, TE – which was founded in 2006 by Williams and Mohawk owner James Moody – now has full concert calendars going in three of Texas’ major markets.

“It’ll be similar to what we book in Austin and Dallas: indie rock, punk, hip-hop; progressive stuff and interesting older stuff,” Williams says of the acts he plans to bring to Paper Tiger. “San Antonio has always had a strong metal scene and a good punk scene too… and of course DJ stuff does well everywhere. But there are a lot of indie acts and the like that skip the market and we want to help change that.

“In a way, it reminds me of Austin 20 years ago: lots of music fans and musicians and cheap rent, but a bit isolated from routings for tours,” Williams notes. “Agents are really excited to have another option in Texas and have started putting a ton of holds on the calendar.”

Chad Carey, the restaurateur who acquired the White Rabbit building last fall and transformed it into the Paper Tiger, which debuted March 20 with a free show headlined by Danish post-punk group Iceage, says he cold called Transmission to ask for help booking his new venue. He didn’t know Williams or Moody, but he knew their work.

“Living in San Antonio, my friends and I often found ourselves driving to Austin to go to shows at Mohawk, Red 7, and also to go to Fun Fun Fun Fest,” Carey told the Chronicle by phone last week. “That’s how I knew they were the only ones we wanted to work with.”

It’s Carey’s hope that Transmission’s expert music curation will help make Paper Tiger the venue that San Antonio deserves. But when asked if the citizens of Alamo City will take kindly to Austin music scenesters booking their shows, Carey acknowledges the fiercely loyal attitudes of locals.

“We can be very protective and take almost a belligerent pride that we are not Austin or Houston,” he laughed. “Anything that reeks of pretension, we jump on it and mock it.”

“I don’t know how people will react to it,” Carey added. “But our goal is simple. We just want to create a good San Antonio rock venue.” 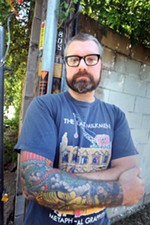