South By Southwest sets the annual agenda and we spend the rest of every year catching up with the Festival breakouts. Perhaps no woman other than Aussie spitfire Courtney Barnett netted instant conversion like Tanya Tagaq, a contemporary throat singer from the Canadian Arctic Archipelago. Thursday night at Fusebox Music, she encored locally. 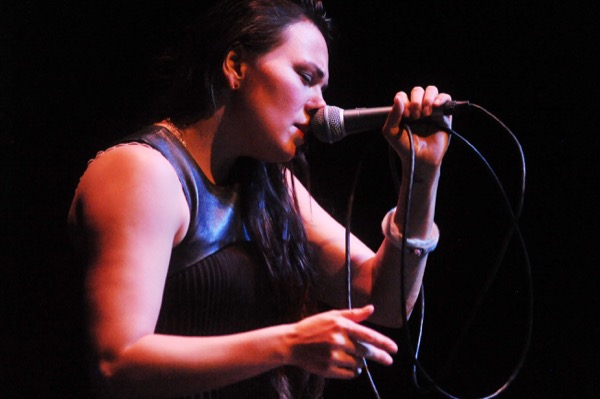 Filling every seat of the deep, long Stateside at the Paramount, Tagaq buzzed the daylights out of day two of the mind-bending Austin arts festival, whose programming remains gratis.

“If just 10 percent of attendees contributed $25, it would ensure free programming for the rest of the festival,” winked Fusebox’s cherubic Executive & Artistic Director, Ron Berry, who verged on giddy in his introduction of the program. He knew, too. Tagaq slayed.

Providing a live soundtrack to 1922 silent film Nanook of the North, widely considered the first narrative documentary, the singer began the performance by explaining her blood ties to the Inuits onscreen. (“Life was so hard for my ancestors.”) Controversial still today for staged sequences, the work – commissioned in this multimedia format by the Toronto International Film Festival – unspools as authentic today as an honest-to-God snowstorm.

The Polaris Prize-winning host rubbed her belly before commencing, loving on our barbecue but not so much the climate.

“It gets 40 degrees hotter here?” she exclaimed. “Don’t put an Eskimo in Austin!”

This one melted local hearts and minds.

Flanked by a drummer and fiddler, Tagaq sat on the floor under the screen with monitors in front of her as ancient footage of an Eskimo family struggling for survival near the polar cap flickered above her. Slowly sounds rose from her throat in time to the percussive heartbeat to her right and arterial sawing on her left. Her lungs expanded and contracted both.

Out of her guttural hum soon began hyperventilation and cries of ecstasy punctuated by sounds of spirit possession. During one fishing sequence, the trio’s tribal thunder rolled Tagaq’s eyes white as she rocked back and forth in place and craned her neck upward to allow whatever moved through her to escape. Drama not melodrama boomed with every crescendo from the band.

Her ferocity during a dog fight sequence rippled through the full house like a stadium doing the wave.

When Nanook spears a seal through the ice, Tagaq’s vocalization of the death struggle culminated in explosive yells. As the hunters skin it, gut it, the dogs revert back to wolves, snarling and snapping. Tagaq went lupine. Rather than a physical, lycanthropic transformation, however, her aural embodiment of the moment was terrifyingly real.

A lullaby coo for igloo commingling pitted against an asthmatic rasp to represent the dogs outside in a storm, the killing of a walrus – scene after scene penetrated movie lovers through their eardrums as Tagaq unknowingly reanimated late, great Austin free jazz queen Tina Marsh, who howled the same screen gem as part of the Alamo Drafthouse’s silent film/live local score series a decade ago.

Hard to imagine Nanook of the North and Tanya Tagaq without one another going forward. The film explains her core being and artistry, and she brings back to life an almost 100-year-old landmark. Owns it.