The once and future fastest rapper

You were out of luck if attempting to gain entry through a bevy of the burliest security even an hour before Twista’s 1:20am start time. While the former Tung Twista’s set was brief and chaotic, the Chi-Town legend didn’t disappoint nearly as much as the Trinity Hall at Old School’s cranky sound system. 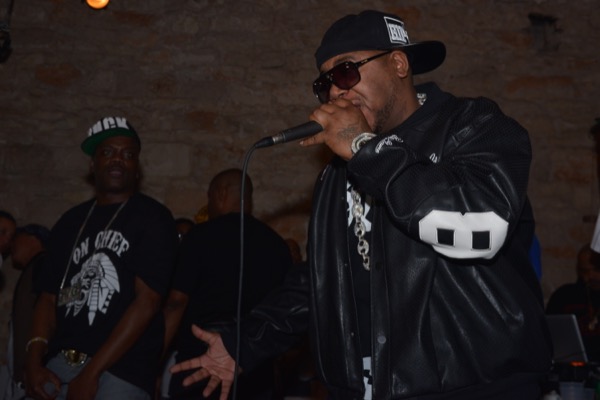 When the once and future fastest rapper hit the stage, still surrounded by minions and flanked by besties, he kicked off a too-short set heavy with cuts from new LP Dark Horse (Get Money/Caroline). Opener “Got Away” couldn’t get out of Twista’s mouth fast enough as the MC with the diamond smile hollered shout-outs to seemingly one and all. (Tech N9ne was there in spirit, at least).

New cut “I Am Such a Mobsta” came slow and furious with enough bass to further muddy an already overtaxed sound system, and while the “Slow Jamz” off of 2003’s Kamikaze disc was an obvious bid for the attention of an audience seemingly half-filled with imported Femme Fatales and Gucci girlz, “The Adrenaline Rush” of Twista’s old-school delivery remains his single best selling point.

As for the crowd, they ate it up with “Worldwide Choppers,” and by the time 2am rolled up and the mounted patrols outside bucked wild, Mista Twista and his many cohorts had already left the stage, à la “Let’s Go.” Old school still rules, but Twista’s appearance defined rough around the edges.