Induct the Texas groover into the Rock & Roll Hall of Fame!

“If y’all can’t get in the groove tonight, you’d better just go back to where you came from,” offered Joe Nick Patoski to a packed Paramount Theatre Saturday night. Having just screened his new doc, Sir Doug & the Genuine Texas Cosmic Groove, he made the most convincing case for his subject as Texas’ essential musician with an all-star music tribute. 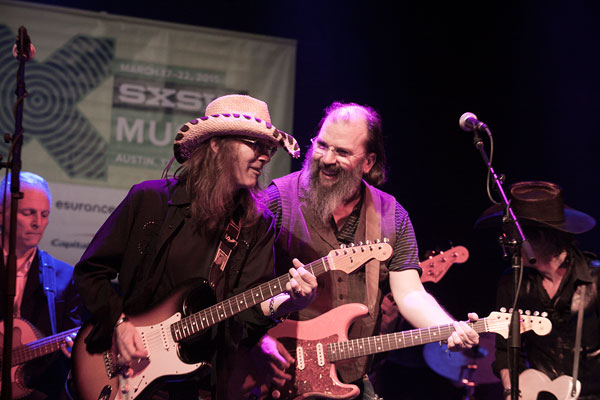 Shawn Sahm, looking eerily like his father (as always), and Steve Earle, 3.21.15 (Photo by Jana Birchum)

Freda & the Firedogs opened, Marcia Ball and company hearkening the heyday of Seventies Austin as the fivepiece unloaded a casual “Be Real” and “Texas Me.” The aura of the venue was boisterous, with hollering from the start and the audience resisting the staid setting as Sahm’s eclectic and infectious groove instantly took over.

For the next two hours, a roll call of Texas’ top musicians poured onstage in rapid succession, supported by the stellar house band of Charlie Sexton, bandleader Michael Ramos, Denny Freeman, Speedy Sparks, and the original bass player for the Sir Douglas Quintet, Jack Barber. The Bizarros delivered a loose “Groover’s Paradise” and the Krayolas’ David and Hector Saldona, decked out in garish suits, offered up “Who’ll Be the Next in Line.” Patricia Vonne schooled everyone on castanets via “And It Didn’t Even Bring Me Down,” and Rosie Flores mined Sahm’s “Rollin’ Rollin’,” both sparking cheers from the San Antonio contingent.

Following Sexton’s funky jazz flourish on “The Song of Everything,” Steve Earle closed the guest lineup with “The Rains Came” and his own “San Antonio Girl,” aided by Austin’s Mastersons on fiddle and guitar.

Texas Tornados, led by Shawn Sahm playing every part of his father’s dynamic energy and enthusiasm, brought the evening full-circle with an hour set that dug deep (“Meet Me in Stockholm”) and retreaded early numbers with their own flair (Augie Meyers’ ripping accordion on “Hey Baby Que Paso”).

“We’re gonna turn the Paramount into the Soap Creek Saloon tonight,” declared Sahm, bringing on brother Shandon Sahm to play drums for a rousing “Mendicino.” A few songs in, the aisles filled with dancers as Earle joined back on guitar for “Groover’s Paradise” and “Texas Tornado,” and Roy Head spun microphone acrobatics around his “Treat Her Right.”

Closing send-off “She’s About a Mover” packed the stage with the entire cast. As Patoski made clear, this was just the beginning of a new movement to bring Doug Sahm the recognition he deserves for his incomparable role in American music. Saturday night, that mission reignited the cosmic groove in Austin and beyond..