Troublemakers – the mighty and mystical made metal

Eric Wagner and Ron Holzner are veterans of the rock wars: greying, grizzled, bloodied but unbowed. Former members of seminal Chicago metal act Trouble, the pair keep the fire burning in the Skull, a group formed specifically to stoke those ancient embers. 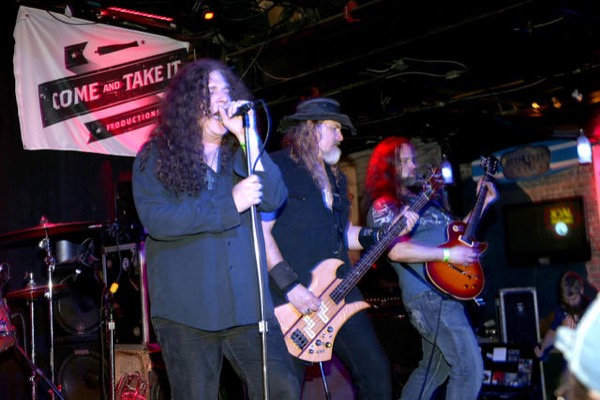 Lighting the fuse with “Trapped Inside My Mind,” first song on debut LP For Those Which Are Asleep, the quintet immediately demonstrated what makes the Skull (and by extension Trouble) special. Starting out slow and heavy, working the riff like a miner swinging a sledgehammer, the band moved into an Obscured by Clouds midsection. The spacy sojourn dissipated into the kind of sonic blood and thunder younger bands can’t manage minus ProTools.

Wagner’s voice, undeniably aged, retains its awesome power, his shrieking growl cutting through the din like a scythe.

“Till the Sun Turns Black” and “Sometime Yesterday Mourning” pounded and slashed, the latter adding dollops of melody drawn from Wagner’s love of the psychedelic Sixties. “Send Judas Down” and “The Last Judgement,” a reclaimed Trouble cut, worked up both the energy level and the sparse crowd. Another Troublemaker, “End of My Daze,” raised metaphorical lighters high.

The super grunge of “Psychotic Reaction” – a Trouble original, not a Count Five cover – brought it home on a classic metal gallop before the set closed with a jam on the Beatles’ “She’s So Heavy,” which Wagner watched from offstage.

The mighty and mystical made metal.