A year removed from premiering documentary Our Vinyl Weighs a Ton: This Is Stones Throw Records at SXSW Film, the independent left coast label was back again cultivating a cohesive evening about boogie. While last year’s showcase celebrated a love for all things played at 45rpm, the 2015 edition was dominated by bizarro funk and R&B.

Alexander Brettin, who looks like the long-haired stoner from Workaholics, fronted fivepiece Mild High Club, the most blatantly psychedelic act on the roster. Their warped aesthetic sounds like the Beatles on an off day... with much better drugs. 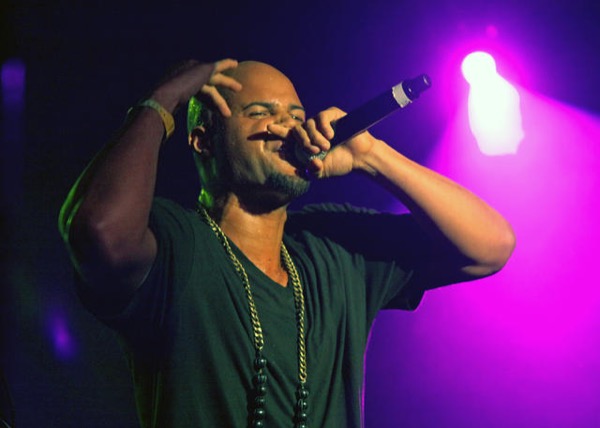 The showcase’s only rapper, Homeboy Sandman, 3.20.15 at Empire Garage (Photo by Shelley Hiam)

In their first ever live show, Nx Worries (pronounced “no worries,” because vowels are so passé) cultivated a thoroughly pimped out vibe. Think Morris Day with more acid.

The showcase’s only rapper cruised through highlights from 2014 LP Hallways with a disarming delivery. Homeboy raps as if he’s merely thinking out loud. He appreciated the simple pleasures of wi-fi and paved streets on “America, the Beautiful,” and let us into his wandering mind on “Problems.”

Mayer Hawthorne and producer Jake One brought new self-titled album Tuxedo to life onstage with a full band, synthesizers on blast. Donning, well, tuxedos, the crew opened with Nate Dogg homage “Number One” and followed with a relentless series of post-disco roller skate jams. It felt a lot like the most awesome 1981 high school prom imaginable.

Tuxedo is completely derivative, but by the time they poured an encore of “Henny & Gingerale,” no one seemed to care.

Peanut Butter Wolf, Dam Funk, and J-Rocc closed the night with a soggy Texas edition of Funkmosphere, the long-running L.A. dance party. A toast to boogie? I’ll funk to that.