Kansas City mother/son duo has it all except better BBQ 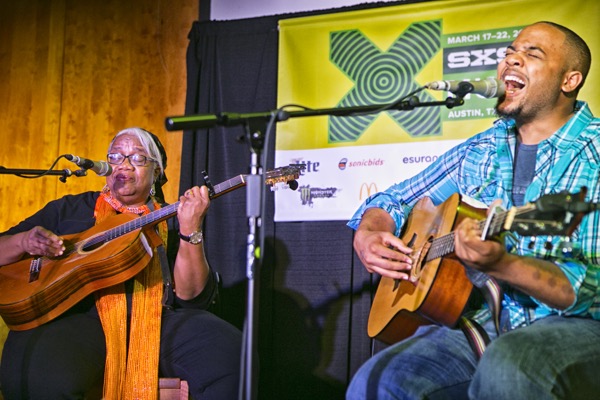 Guitarist/vocalist Madisen Ward packs a booming tenor that commanded rapt attention the moment he and his guitarist/vocalist mother, Ruth, began playing. The younger Ward’s songs come infused with a near-constant strain of wistfulness that betrays his youthful appearance. If Thursday night’s audience had been blindfolded while he waxed about the simple pleasures of cherry cola and pie during “Live by Water,” the vast majority would have overestimated his vintage by at least a decade.

For her part, Ruth Ward held down the rhythm line and sung back porch harmonies that conjured the scent of blooming magnolias. Transcendence beckoned when the two locked into a familial swing on “Silent Movies” and explored the depths of an elderly neighbor’s loneliness on “Dead Daffodils.”

Having to stop several times for tuning, the subtle hesitancies of an act quickly thrust into the spotlight were intermittently on display. Not that it mattered to this decorous assemblage. The evening’s only near-miss occurred when Ruth heralded Kansas City barbecue as the world’s best in front of a Texas audience.

Too soon to tell if the Wards’ stripped-down simplicities of raw emotion will find an abiding audience in the indie folk realm, but Bethell Hall gave a standing ovation at set’s end.