Safe bet that the average Yank has never heard of Azerbaijan, a country at the crossroads of Eastern Europe and Western Asia – surrounded by Russia, Iran, Armenia, and the Caspian Sea. Tonight’s showcase brought not one, but two artists representing the country. The Qarabagh Ensemble represents Azerbaijan’s traditions by performing Mugham, the region’s indigenous music. Bandleader Agil Suleymanov, 22, is formally trained in it. Utilizing the tar (a lute), the bowed kamancha, and naghara drum, the quartet jumped right in with an instrumental moving from almost Celtic cadences to Middle Eastern music.

The string-slingers engaged in a playful give-and-take universal to bands. Once Suleymanov added his clear tenor, the mesmerizing modality of the songs took on a transcendental aura. Most there didn’t understand the language, but that proved immaterial given the obvious joy inherent in the material. Such clear communication earned the band not only the rapt attention, but an encore.

By contrast, Qaraqan, born Elkhan Zeynalli and a bestselling author in his home country, engages more Western influences, as evidenced by the keyboard, guitar, and black T-shirt. As befits an artist known mainly for writing, Qaraqan rapped, chanted, and occasionally sang his work from paper over austere, often melancholy music. Given the language barrier and a lack of stage presence, his performance never compelled, though songs accompanied by the Qarabagh Ensemble generated some heat.

Though not from Azerbaijan, Diwan Saz still represents cultural traditions – several at once, in fact. Based in Israel, the group consists of Jews, Christians, and Muslims blending Hebrew and Arab musics. A protracted setup plagued by technical issues set the pace, as the band then spent its shortened set doing battle with feedback and recalcitrant monitors.

Even then, the octet’s energy and skill dispersed the cloud of mechanical crap, at least in the audience’s eyes. The high-energy blend of traditional instruments like saz and qanun with fretless bass and dumbek laid down a serious groove under spectacular vocal performances from 14-year-old Muhammad Gadir and Rabbi David Menachem. The crowd ate it up. 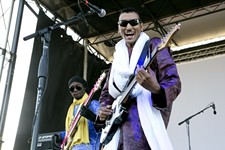 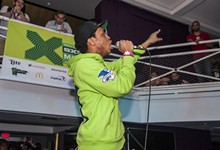