Riding into SXSW on a wave of critical acclaim, Courtney Barnett translated the dynamic of dive bar-hatched indie rock to the big stage Wednesday night. Nonchalantly serving as her own guitar tech pre-show in front of a swelling crowd, she could’ve just as easily been getting ready to perform in a broom closet. 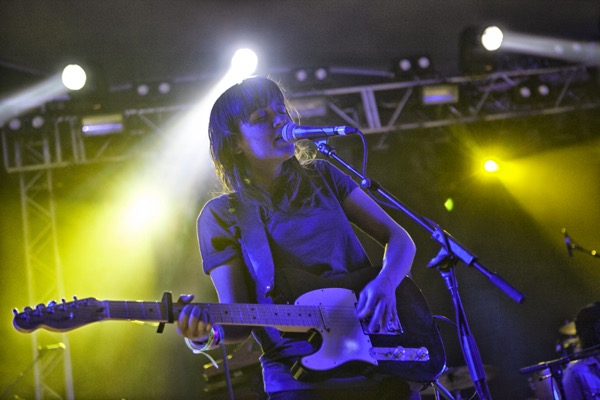 Sometimes I Sit and Think, and Sometimes I Just Play: Courtney Barnett at Stubb’s, 3.18.15 (Photo by Jana Birchum)

What distinguishes the Melbourne singer-songwriter from zillions stomping the same well-worn territory are nonstop clever turns of phrase delivered in the slightly slurred yowl of a woman yelling in your ear at a party.

While such stream of consciousness rants run the risk of being too witty for their own good, Barnett, bassist Bones Sloane, and drummer Dave Mudie punched them up solidly. Drawing a set from Barnett’s loquaciously titled debut, Sometimes I Sit and Think, and Sometimes I Just Sit, the trio connected early with pick-hit “Pedestrian at Best” and squall-enhanced closer “Kim’s Caravan.” 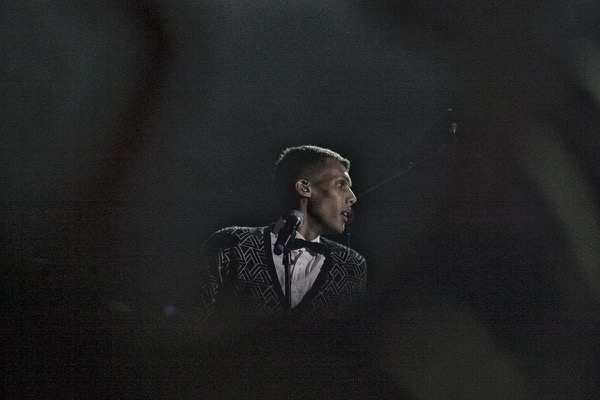 After a fair amount of crowd turnover, Stromae demonstrated the difference between a set and a show. The platinum-selling singer/rapper from Belgium elicited star-power squeals as he and his fourpiece backing band took the stage in matching cardigans and bowties.

Strains of Afro-pop, salsa, and traditional French music abound in Stromae’s songs, not to mention an abiding dose of Nineties Eurodance that would come off cheesy in the hands of less assured performers. Live, he rendered genre delineations irrelevant through sheer presence. His androgynous choreography on “Tous Les Mêmes” recalled the confluence of Marcel Marceau and Michael Jackson.

Following a tongue-in-cheek diatribe in which he reclaimed French fries for the Belgians, Stromae closed with “Papaoutai.” The title roughly translates as, “Papa, where are you?,” an extra-poignant sentiment from an artist whose father was killed in the Rwandan genocide. Effectively weaving such commentary into party anthem fabric is one more factor making Stromae an entertainer in the best sense of the word.