More Drake than a Tyler, the Creator

Vic Mensa, a 21-year-old from Chicago, was recently in Paris with Kanye West. Call him a protegé. The former Emo’s was filled with golden age Yeezy gems pre-set (mostly Graduation cuts), with Mensa hyping their collaboration “Wolves,” due soon on West’s new disc. 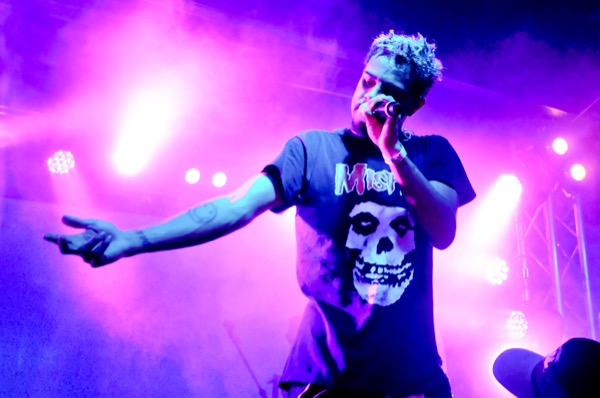 A humble brag, flex, whatever. You’d be doing the same if clocking studio time with Chicago’s adopted father of hip-hop. Mensa sported a punk-vest Misfits combo, which makes sense. He doesn’t traffic in trashy death-punk, but the bass was loud enough to loosen screws.

He endeared the crowd with a few of his earlier, angrier mixtape cuts, but this set was primarily focused on his upcoming album. If you’ve heard “Down On My Luck,” that gorgeous, dusky, burbling ode to dance floor momentum and my personal pick for song of 2014, you’ll know that Mensa’s increasingly interested in the house and new jack swing that defined Chicago in the airbrushed Eighties.

The album seems to be more of that – flirty synthesizers and self-sung hooks that make the MC sound more like Drake than a Tyler, the Creator. One ode paid tribute to letting your girl roll your weed. Mensa’s a romantic.

A song played towards the end of the set, introduced as a eulogy for a murdered “big brother,” prompted a brief, heartfelt reprieve on the violence currently gripping his heritage. With colleagues like King Louis and Chief Keef (understandably) embracing the nihilism, it felt right to see an artist feel the sorrow in a more sedate way.

The room certainly felt it.