New picker joins the line of Fahey and Jansch

Despite his acclaim, Ryley Walker remains a nondescript sort, who can walk through a crowd carrying his guitars no one pays him any mind. Once he straps on one of those instruments, however, the Chicago resident draws attention. Fast. 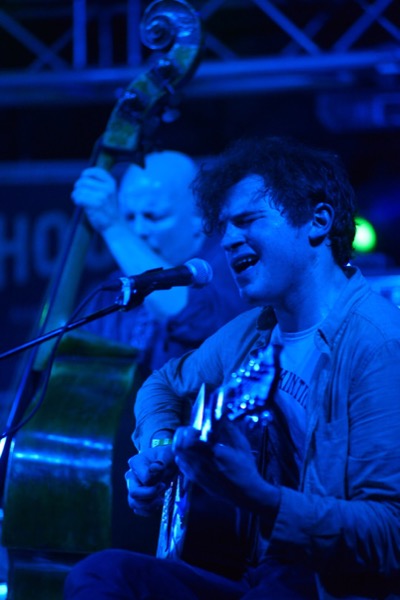 Accompanied by guitarist Brian Sulpizio, electric pianist Ben Boye, and Austin-based Norwegian string bassist Ingebrigt Håker Flaten, Walker mesmerized those in front of Mohawk’s outdoor stage, holding his own against the louder music coming from Cheer Up Charlies and conversations on the balcony. Walker’s finger-picking, somewhere between John Fahey and Bert Jansch, has earned the lion’s share of attention in the press, and the songs wrap around his fleet-fingered patterns.

Despite such skill, Walker seemed disinterested in showing off, preferring instead to set up the kitchen and let his bandmates do the cooking. Suplizio and Boye’s lines meandered to the naked ear, but made perfect sense when anchored to Walker’s jazzy strumming, giving “Sweet Satisfaction” and the title track to his forthcoming LP Primrose Green a power that comes from band chemistry as much as musical intensity. It’s his remarkable voice – fluid, brash, capable of cutting through the din of nightlife – that draws the ear and keeps it.

Borrowing his swoop from Tim Buckley and a penchant for passionate repetition from Van Morrison, whose “Fair Play” acted as respite from the exhortations surrounding it, Walker put his larynx front and center, letting his whoops and growls punctuate a dense performance. Modest to a fault, he dragged himself into the light the moment he put fingers to frets and lips to microphone.