Safely cloistered inside a polygonal metal coat of armor, ace K-Pop producer/composer Hitchhiker made his live debut as a DJ Tuesday night. Curiosity was high in the wake of last year’s single, “11,” which has garnered over 2.3 million YouTube views with a bizarre, color-saturated video that brings to mind Tim and Eric with a Seoul pedigree. 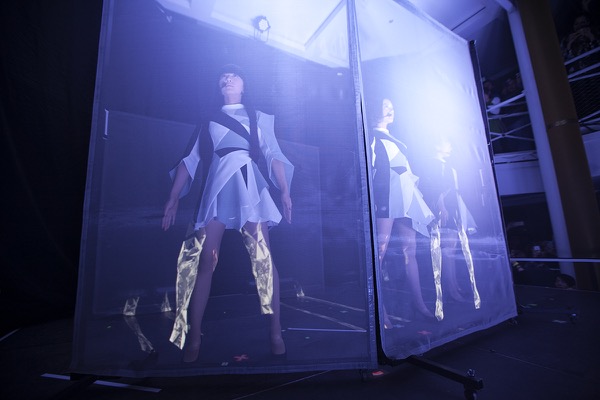 After entering to a pomped-up corporate anthem, Choi-Jin-woo launched right in on the hit. Though predicated on an easily mocked electro-trap appropriation surge, “11” taps the precise junction of pleasure and annoyance with its warped baby babble hooks. Head bobs of recognition immediately ensued, but Hitchhiker couldn’t maintain that level of energy for the entire set.

Despite a high quotient of teeth-rattling drops and intriguing flirtations with everything from bounce to bhangra, half the crowd turned its back on him to watch stagehands set up for J-Pop sensation Perfume. To be fair, the Hiroshima-bred electro-pop trio brought along a high-caliber production befitting a group that once sold out the 50,000-seat Tokyo Dome. Elated cheers accompanied Perfume’s cinematic entrance.

Dressed in orange-and-purple outfits vaguely recalling Seventies stewardess chic, Yuka “Kashiyuka” Kashino, Ayaka “A~Chan” Nishiwaki, and Ayano “Nocchi” Ōmoto opened with their 2012 hit, “Spending All My Time.” The mix of robotic and vogue-inspired choreography was impressive enough to make the lack of live vocals almost not worth commenting on. While the seeming goal of songs like “Electro World” is to sound as processed as technology will allow, that clobbering determinism didn’t dehumanize the trio’s ebullient stage presence.

Trying to resist Perfume’s high-pitched exhortations to have fun and sing along ultimately proved futile. They ended their 45-minute set with “Spring of Life,” a sugar-spiked sledgehammer of über-happiness that got involuntarily caramelized in my brain before the third chorus.