SXSW headliners warm up Monday with a PBS taping

TV on the Radio electrifying Austin City Limits Monday night brought to mind an obvious antecedent. A cliched, some might say quasi racist one, but when Living Colour tore out of New York in the Eighties, even then everyone tried to recall a black rock act as commercial or convincing. In my mind, TVOTR would have been Motown’s rock act during its glory years. 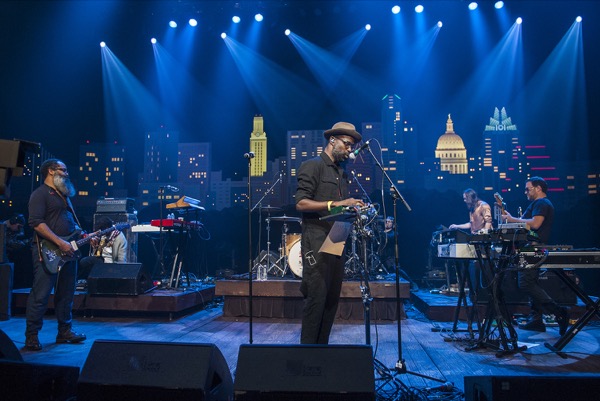 Which is to say a singular link in the chain of African-American music. Black punk from Bad Brains to Austin’s new Blxpltn holds its ground still, but the rock & roll equivalents led white bands – Jimi Hendrix, Arthur Lee, Phil Lynott. Others, George Clinton and Sun Ra, couldn’t be contained in single genres.

Like Living Colour, TV on the Radio – a SXSW headliner this week – traffics in a hard, progressive, funk-rock live, jacketed into pop. Fifth LP Seeds plants at least two cuts, “Could You” and “Happy Idiot,” that should be FM hits any time in the last 30-40 years if commercial radio worked the way we wish it would. And okay, maybe a hairstyle was shared between Living Colour guitarist Vernon Reid and the Brooklyn quartet’s touring replacement for Gerard Smith, TVOTR bassist who died of lung cancer in 2011. 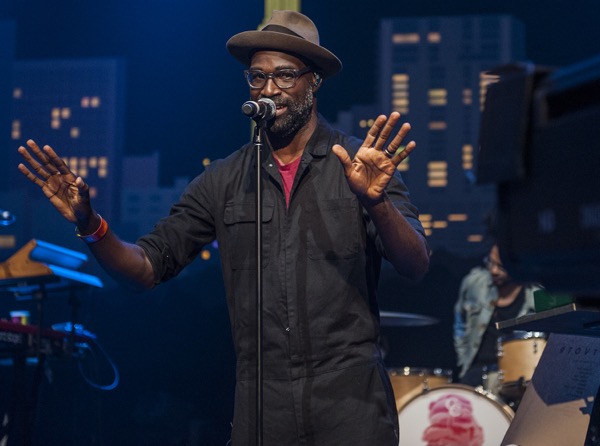 A white frontman delivering that sentiment gets ignored. When the color of Adebimpe’s skin means he could be randomly gunned down by law enforcement under all the wrong circumstances, “Trouble” becomes upbeat defiance in a continuing era of racially motivated violence and executions.

“This song is dedicated to anyone seriously going through something,” said the singer before launching into the song. 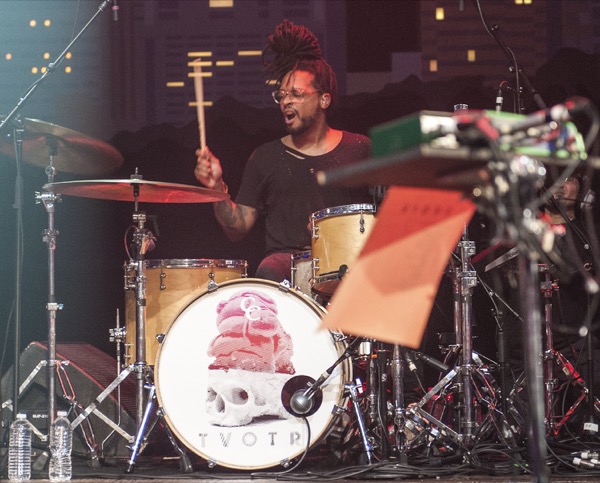 In this case, it was only SXSW, and the three tiers of people at the Moody Theater, very few of them black, had only just begun. Their standing ovation prompted an encore (Dear Science’s “DLZ”) to wrap the 75-minute PBS taping, but they’d driven the band from the the first note. TVOTR radio responded with a lean, raw performance as exhilarating as it was exciting.

If ever an album deserved a full run-through, it’s Seeds, off which sprouted half a dozen tunes in the 14-song set. “Happy Idiot” didn’t quite polish up as pogo-worthy as its counterpart in constant rotation on local frequency KUTX, but the XTC meets Hüsker Dü avant-pop of “Could You” melted a dance move or two from the females bopping in sync to every note from TVOTR. “Wolf Like Me,” from 2006’s Return to Cookie Mountain, brought howls from the audience, drummer Jaleel Bunton’s thunderous beat – the engine all night – coated with an auxiliary trombonist’s brass blush for a marching band locomotion.

TV on the Radio, there’s not another like them. 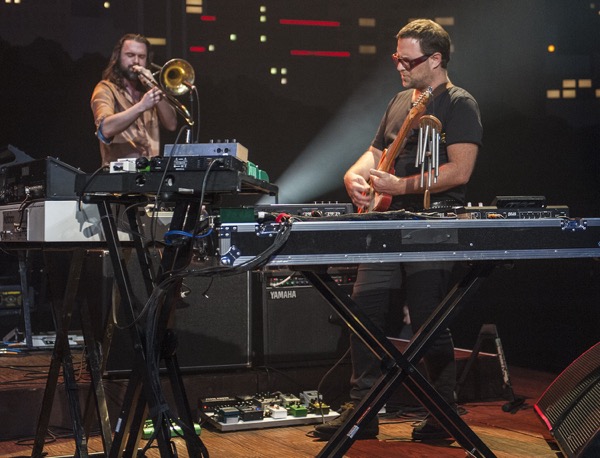