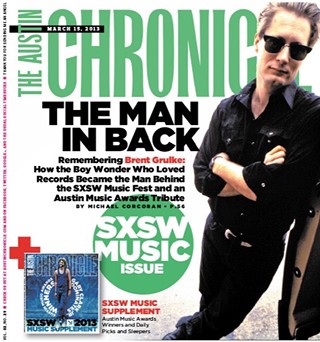 Our SXSW Music issue 2013, with the late Brent Grulke on the cover.

Thursday at South by Southwest doubles as a day of remembrance.

Announced this morning, Red River venues Cheer Up Charlies and the Mohawk will engage in a midnight moment of silence Thursday morning to honor the four lives lost (and injuries sustained by others) when a car driven by Rashad Owens crashed through a crowd of festival-goers shortly after midnight during SXSW Music 2014.

Twin Peaks, Waxahatchee, and Real Estate are expected after 11pm that night at Cheer Ups. Inside Mohawk, Jello Biafra’s Guantanamo Baywatch, the Memories, and Part Time are scheduled for a House of Vans showcase. Outside on the main stage: the Damned, Thee Oh Sees, and Future Islands.

“With sad hearts we carry the memory of that night and know the incident left an indelible mark on many people,” read a short statement from SXSW.

Later that afternoon – 5:30pm – at Auditorium Shores there will be a re-naming of the trailhead deck as Brent Grulke Plaza, in honor of the longtime SXSW Creative Director. Grulke, a former Music Editor at the Chronicle who took a job as production manager with SXSW in 1994 and then spent more than 20 years with the festival, died of a heart attack on Aug. 12, 2012, at the age of 51.

My Jerusalem, Mac McCaughan, Charles Bradley & His Extraordinaries, and Spoon pick up afterward with the first of three free SXSW concerts scheduled for Auditorium Shores.