When Paul Qui’s cooking dinner while ?uestlove smiles and spins soul samples, and you’re hanging next to Jay Pharoah and Danger Mouse and 98 others who may be famous but also may be simply lucky winners picked off the street, it’s hard to harp on the truth that D’Angelo only played for 30 minutes. 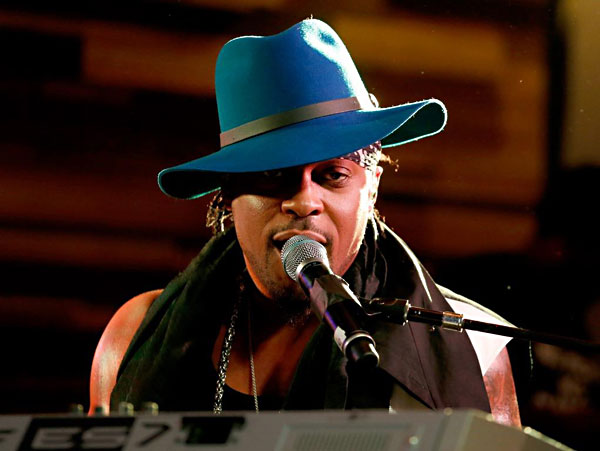 Consider it dessert, the fifth course in an evening that had guests sipping Sweet Potato cocktails while slicing through succulent slabs of smoked pork shoulder.

D’Angelo’s presence became official on Friday, when news broke that December’s Black Messiah would play a set for Samsung on a rooftop Sunday evening. The exclusivity stirred locals into a tizzy. Prepped to play the masses last year at the Austin City Limits Music Festival, the 41-year-old Virginia native who had not released an album in 14 years canceled on short notice. Now back, and brandishing a batch of red-hot new material, he chose instead to appear before 100.

D’Angelo entered minutes after I’d polished off my second slice of pork. Wearing black jeans, a black vest, and black boots, plus at least two scarves – three, maybe – and a black-n-white bandana under a fedora, he lived up to his most recent album title. His band, a fourpiece no doubt led by bassist Pino Palladino, matched – save for his backup singer, Kendra Foster, draped in gold. They stood under the showering lights along Micheladas’ rooftop.

D’Angelo, seated in the middle of his crack Vanguard, tickled out the chords to “Betray My Heart.” That song, ninth on December’s surprise stunner, carries a fullness through six minutes you’d think a makeshift stage couldn’t replicate. Sunday night, the Vanguard made it better. Palladino, one of the instrument’s finest thumpers, added big kicks and longer walks. D’Angelo flipped new tones, while also adding more of his wordless vocals in the bridge. Foster in turn pushed him. They wasted little time in warming up.

A quick break into “Spanish Joint” served as a reminder of time’s irrelevance. A deep cut through 2000’s Voodoo, the song hums and builds chaos under compression. “Really Love” then burned, Foster’s vocal climaxes on each hook elevating the song further. “Send It On” followed before “Brown Sugar,” the closer, teased out over a long intro as D’Angelo got off they keys and stepped up front.

Standing along the side overlooking Second Street throughout the show, I peered over the guardrail at some 40 fans gathered on the sidewalk below. Some swayed, some danced, some bobbed their hands and sat on benches. Many stayed throughout the short set. Those I recognized later considered it a highlight.

“It sounds really great,” one wrote. “We just wish that we could see it.”