The Resurrection of Doug Sahm 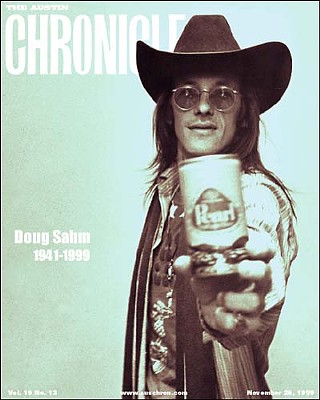 Doug Sahm’s roots run deeper into this publication’s than most. The Chronicle’s 1981 birth put it directly in the line of punk rock, and the scene’s Drag-bound headquarters – Raul’s (no relation) – became its hang. Along with the blues scene being groomed by Clifford Antone down on Sixth Street, punk triangulated into the paper’s soundtrack in the person of Sahm.

Although I witnessed Sahm’s SDQ configuration burn down Antone’s when it was on the Drag in the mid Nineties during SXSW one year – tough as the Sex Pistols and louder than Metallica – he was no punk, per se. DIY – definitely; though Sahm lived on labels major and indie his entire career, no one did it themselves like Sir Doug Sahm. He’d understand the free-fall our traditional music business establishment finds itself in today.

A defining paper for us, 1999’s tribute issue to Sahm – put together in a matter of days following his sudden death from a heart attack that November – broke hearts only salved by the local music community rising up in unison to pay fealty. Patoski’s piece for it remains one of the best. Since nothing speaks of Sahm except music, he and our Editor Louis Black have worked tireless on a music tie-in.