Next Up at SXSW: Madisen Ward & the Mama Bear

Mother and son play it by ear

Midwestern mother and son folk duo Madisen and Ruth Ward play under the moniker Madisen Ward & the Mama Bear. The Kansas City twosome made its television debut a couple of weeks ago on The Late Show with David Letterman after making waves at the Americana Festival in Nashville last September. They debut at the Newport Folk Festival this summer. 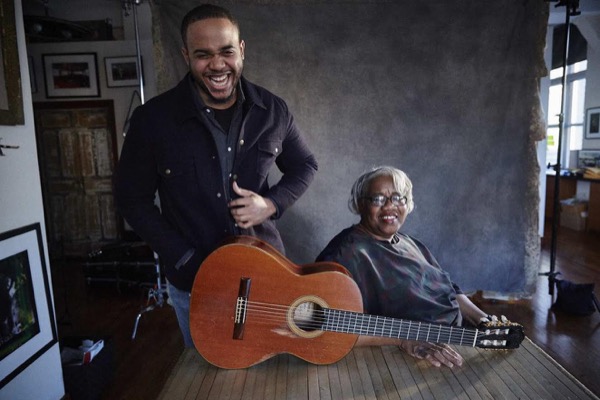 While this is their first SXSW, it’s clear the pair has arrived, captivated, and are here to stay. 2012 debut EP We Burned the Cane Field gets a full-length follow-up in May on Glassnote Records.

“I’ve been influenced by a lot of things,” says Madison. “I used to listen to a lot of folk music, people like James Taylor, but there was a long period from elementary school through early high school it was just like hip-hop and rap. That was all my brother and I listened to.

“It wasn’t until the middle of high school that I came back to the folk sounds I always loved. I also got into a lot of indie rock like the White Stripes.”

Mother and son started off playing in coffee houses in Kansas City.

“Madisen started to play the guitar, so that took a while,” says Ruth. “I always played in coffee houses and places like that. When I realized how good the songs were that he was writing, I started inviting him up onstage to play with me.

“The show used to be called ‘Ruth Ward and Friends.’ Then I realized how much I enjoyed playing with Madisen, so we decided to just start playing together all the time. That’s how it developed.”

”I didn’t go to college, so that helped with being able to focus on music,” adds Madisen. “Being mother and son, we both kind of know where the other one is going to go. That was the reason she and I started playing together, because there was an interesting connection there. Individually, we were doing our own stuff with music, but when we brought it together, something about it seemed fresh and original.

“People always ask us what it’s going to be like down the road, and I’m always like, ‘We’ll see.’”

“She reads musical biographies like crazy,” explains Madisen. “You know those paid programming shows, where they keep on showing different musical artists from the Sixties – one hit song after the other? I’ll watch that with my mom and she’ll be like, ‘Oh I read that guy’s biography. He was amazing.’

Madisen Ward & the Mama Bear showcase at the Gatsby on Friday, March 20, 9pm.