Touching down in Austin for the South By Southwest Music Conference? You’re one in a million, baby.

A Soft Place to Land

Whether you’re a seasoned veteran of the SXSW scrum or new to the game – a card-carrying member of the music conference cognoscenti or a Singapore indie label owner on your first scouting mission – let us be your guide. As the official media sponsor of the festival, The Austin Chronicle remains you’re best resource for everything SXSW-related. Begin here as we acclimate you with the ins-and-outs of everything SXSW. 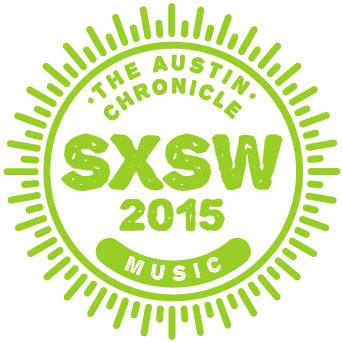 So Many Bands, Such Little Time

There are over 2,000 acts officially showcasing at SXSW between Tue., March 17, and Sat., March 21, and many hundreds more crashing the party. If you’re ambitious, you might personally witness all of 50. Choose wisely.

The conference’s full music schedule is listed in the print version of our paper, available for free on racks all over town. You can navigate it digitally on the SXSW official website. Our web-space maintains a full cache of festival news previews.

Digging through that epic lineup of unknowns, buzz acts, and big-name bands can be more disorienting than a bender with Scott Weiland (showcasing his new band the Wildabouts on Sat., March 21, at Bar 96), so accept a little help from the pros. Our seasoned team of contributors have sieved out the most compelling performers to see. Much of that can be found in our SXSW Music issue, hitting stands Wed., March 18.

In that double-stuffed volume, as well as three ensuing daily issues – Thursday, Friday, and Saturday – will be Picks & Sleepers™, best bet showcases, and album reviews from official SXSW acts. Also look for my daily “Playback” music news column, which keeps tabs on festival proceedings and tells the stories behind the music.

If you missed a performance or yearn to compare your opinion of a show with that of our critics, keep an eye on our music blog Earache! for daily show reviews.

There are three ways to roll at SXSW: with a badge, a wristband, or as an uncredentialed rogue. Consider this scenario: that super hip post-electro group of New York art school brats Rolling Stone just declared the hottest band in America is playing at a shot bar on Sixth Street and everyone has come out to see them. Those with badges will be let in first, followed by SXSW wristbands, then, if the venue hasn’t been locked down by the Fire Marshall, ones without wristbands or badges can pay cover to enter.

One caveat: badge-holders may use one of their limited SXXpress passes to skip the line. That perk’s detailed here.

SXSW’s website provides a useful chart detailing which badge type (Platinum, Gold, Music, Film, or Interactive) affords you which opportunities. Once you’re ready to purchase a badge or you need to know when and where to pick them up, follow this link.

Wristbands, which guarantee that you’ll never pay cover for an official showcase, but doesn’t necessarily guarantee you entry – that depends on capacity – are currently sold out. Stay vigilant here or on Earache! to see if they release another batch. 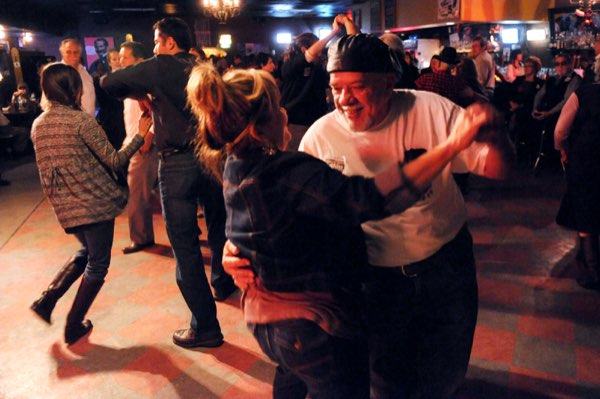 SXSW banners hang over roughly 100 stages every year. You can find them listed in SXSW’s full-page schedule, which runs in the Chronicle every week from now until the festival. It’s also laid out, much less succinctly, on the SXSW website.

SXSW annexes clubs that are, for the most part, located in the downtown center and in walking distance from one another. While many of them host live music year-round, others, like many of the temporary stages on Rainey St., only host bands during the festival. What’s more, SXSW puts stages inside bars that have recently gone out of business.

For example, shuttered Red River rock dive Headhunter’s has been appropriated as the 720 Club and gay country western hang Rusty’s will be called the 405 Club. That leaves a greater number of music venues all over our city that are not affiliated with SXSW. If you’re visiting Austin, you’d be missing out if not to hear some music at these local staples:

Hole in the Wall (2538 Guadalupe): The eternal campus area watering hole hosting live music every night for over 40 years has been a favorite of local legends such as Doug Sahm and a birthplace to breakouts including Spoon.

Sahara Lounge (1413 Webberville): Deep in Austin’s eastside, in an area formerly known as the “hog pen,” stands this funky, eclectic, and musician-owned neighborhood joint with live music ranging from rock to hip-hop and Afrobeat.

The Broken Spoke (3201 S. Lamar): A boot-scuffed dancehall so well preserved that a half-smoked cigar left behind by Bob Wills remains on display. A south Austin classic legendary for its chicken fried steak, traditional country music, and two-step dance lessons.

Want to peep the big picture? Check out our city-wide club listings.

Parking is easy in downtown Austin during SXSW. Just kidding. You stand zero chance of navigating the clusterfuck or touring vans, Ubers, Lyfts, taxis, pedicabs, and horse-drawn carriages and finding a parking spot anywhere inside the city center.

SXSW has done you the solid of creating a list of CATA buses and train (not plural) that may help you during the conference – reference that here. SXSW also has in place a system of festival shuttles – one route going north, and one going south – running March 13-21. For the first time, the festival has added a boat taxi that floats you across Lady Bird Lake for free. Unfortunately, that’s only scheduled to run during the interactive portion of SXSW. Full shuttle details here.

For locals, the best method I’ve found is combination of car and bike. Throw your velocipede onto your rack and get relatively close to Downtown, then bike the rest of the way. Anyway you travel, accept the fact that you’ll be moving slowly. Plan accordingly. 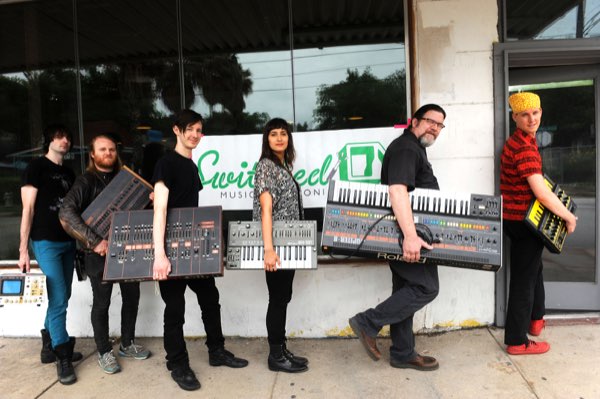 The crew at Switched On (Photo by John Anderson)

If you’re performing at SXSW, you best have your gear on point. Maybe the airline’s baggage handlers broke the neck of your beloved ’67 Stratocaster, or your amp blew a tube last night in Tusla, or you need to rent a PA for your illegal midnight bridge show, or you just need a set of strings. Here are a few local music shops that can help you out in a pinch:

Rock N Roll Rentals: Trusted and cheap local music rental headquarters with an endless supply of gear that ranges from PA and lights to instruments and effects pedals. Now with north and south Austin locations.

Austin Vintage Guitars: Not only a treasure trove of used (and new) stringed instruments, you can also sell your gear to them after becoming so depressed by your crappy SXSW showcase that you’ve given up on music altogether.

Strait Music: This veteran institution has a huge south Austin retail space, but in this case we’re recommending them for repairs as their guitar techs are talented and, more importantly, friendly.

SXSW isn’t purely for entertainment. The inclusion of the word “conference” implies you might learn something too.

During the day you’re faced with the decision of whether to attend sponsored parties – which include temptations of free booze and bands – or show face at the multitude of SXSW panels that take place at the Convention Center. Doing both is ideal, but don’t skip the latter. Panels offer an opportunity to soak in wisdom from industry experts on the topics of trends and culture, and they’re often riveting. Get hip with our SXSW panel sampler, which taps into discussions ranging from the legacy of Lead Belly to the future of music festivals.

In addition to panels, SXSW also hosts live interviews with rappers, pop stars, rockers, and music moguls as well as their highly touted keynote speech. Read recaps of interviews and speeches on our blog daily.

Lastly, to get the most out of your SXSW experience, we recommend that you stop staring into your phone and try out some old fashioned “social” behavior – speaking face-to-face with other attendees. The music business is rife with interesting characters and many of them are in Austin during SXSW. Here’s a suggested opening line: “What’s the worst band you’ve seen this week?”

Some call it “Networking,” we call it making friends. 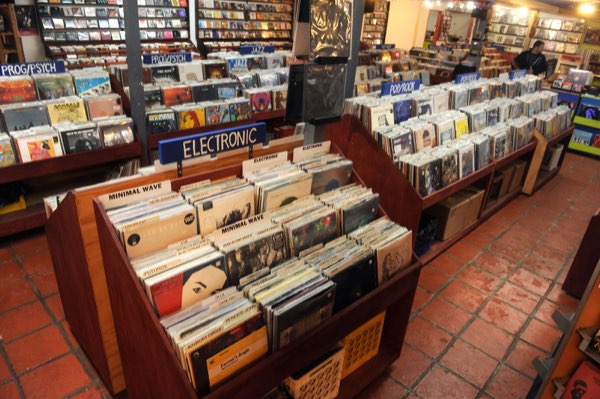 End of an Ear (Photo by John Anderson)

So all this live music is making you want to buy actual, physical product. Well you’ve come to the right place. Austin’s infatuation with music is quantified by how many record stores we can keep in business.

Waterloo (600-A N. Lamar): The local Mecca of music retail offers acres of new and used CDs, vinyl, and rock & roll paraphernalia, as well as hosting a plethora of big name festival acts in its parking lot during SXSW.

Trailer Space (1401 Rosewood): This Eastside hangout with nightly bands remains the best record store to get drunk in.

Breakaway (211 W. North Loop): A sophisticated selection of soulful music and a clean shop with chairs your significant other can sit in while you dig through racks.

Encore (809 E. Sixth): Austin’s foremost metal marketplace, resurrected downtown after a brief closure, boasts CDs and vinyl of all genres as well as T-shirts and DVDs.

End of an Ear (2209 S. First): No one beats this South Austin shop’s distinguished selection of heavy music (prog, punk, experimental, psych, metal, etc.). It also has a back room selling stereo gear and drum kits.

Whetstone Audio (2401 E. Sixth): This Eastside boutique sells connoisseur-quality turntables, amps, and speakers as well as the round things you play on them.

Seen 75 bands and you can’t stand to experience one more unoriginal egomaniac with a microphone? Are the walls of the Austin Convention Center closing in on you? I feel you.

Here are some non musical alternatives:

Dip: There’s nothing more Austin-centric than going for a swim at the Barton Springs Pool. The three-acre spring-fed pool is centrally located at 2201 Barton Springs Road and it’s only $3 to get in. Just down river, you can also rent inexpensive kayaks and paddle around Town Lake. An even more localized swimming favorite would be the various pools along the Greenbelt. Because of drought, there’s little water in them currently, but there are still great hiking trails.

Trip: If you’re blessed with a car or van, you can get out of town and see Central Texas on a day trip like hitting the wondrous Hamilton Pool in Dripping Springs or the Natural Bridge Wildlife Ranch drive-through safari, just north of San Antonio.

Skip: Forgo SXSW in favor of another event running concurrently: Rodeo Austin. Located at the Travis County Expo Center, these cowboy Olympics offer ridin’, ropin’, and mutton-bustin’ (where they put a little kid on the back of a sheep and see how long he can hold on). There’s also nightly music, held right in the dirt circle. Some highlights: Willie Nelson & Family (March 14), Dwight Yoakam (March 15), and the Beach Boys (March 18). Yee-haw.

Mind still blown? Beg me for advice at kcurtin@austinchronicle.com.