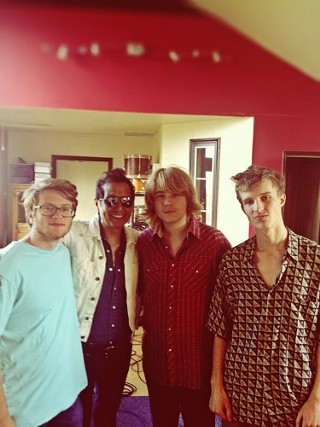 When Margaret Moser presented me with a preteen to write about Austin’s U18 scene in 2009, only him being local guitar great Jon Dee Graham’s son kept me from dismissing the idea. William Harries Graham then became one of our most prolific bloggers. Five years later, his band Painted Redstarts sold me with one of the best local walk-offs I’ve ever witnessed.

At the close of Alejandro Escovedo’s heroic United Sounds of Austin concert at the Moody Theatre January 2014, a three-hour overview of local music history as recounted in words, pictures, and song by Terry Allen, Roky Erickson, Butch Hancock, Lucinda Williams, and many others, the Painted Redstarts scrambled onstage for one final number. Introduced by Jon Dee Graham, the teens then ripped a page from his and Escovedo’s good book: the True Believers’ “She’s Got.” Killed is what she got.

Murdered. Only the song’s originators might have been more thrilling as a finale. And the Troobs couldn’t have matched the raw elan of the Redstarts.

And here it is live: