Thursday night’s going away party betrayed very little sadness. Cindy Cashdollar, Austin’s uncontested queen of the slide guitar for more than 20 years, is moving back to her hometown of Woodstock, New York, to be closer to family. Texas Guitar Women – Carolyn Wonderland, Shelley King, Sarah Brown, and Lisa Pankratz – sent her off joyously. 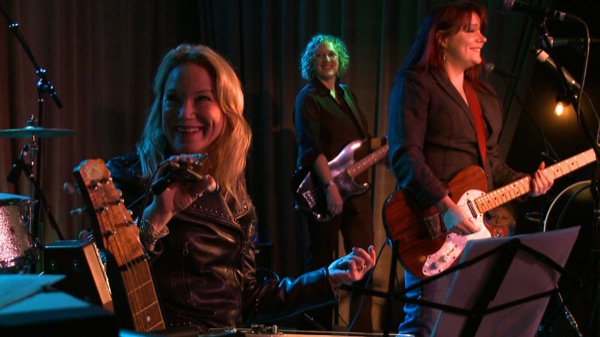 Once they were joined by Marcia Ball and Rosie Flores at the One-2-One Bar, the woman power meter went off the chart. The energy between the sold-out crowd and those onstage hit levels that live music goers sometimes experience too infrequently.

Cashdollar, who came to international prominence as a member of western swingers Asleep at the Wheel, doesn’t sing, so those duties were handled by her bandmates with easy aplomb. While blues held everything together, other styles were represented: Cashdollar’s funky instrumental “Slideaway,” which riffs on Freddie King’s “Hideaway,” and the hillbilly swing of Moon Mullican’s “Lonesome Hearted Blues.”

Although it was the honoree’s night to shine, she shared licks with another guitar monster, Wonderland. King brought roots rock to the proceedings with a high energy reading of the title track to her latest album, Building A Fire. Drummer Pankratz turned in remarkably strong vocals on Barbara Lynn’s “Oh! Baby (We Got A Good Thing).”

Brown took over when Ball joined in and together they recreated a couple of tunes (“Bad Thing,” “Good Rockin’ Daddy”) from a landmark Austin recordings, 1990’s Dreams Come True, a collaboration between Ball, Lou Ann Barton, and Angela Strehli that featured Brown on bass. Flores, another guitarist with unusual flair, joined in to end the two-hour set with a rumbling take on Dave Alvin’s “Long White Cadillac.” At the close, lick trading on Link Wray’s “Run Chicken Run” lifting the band and crowd near rockabilly heaven.

Cashdollar, who’s played with a list musicians that begins with Bob Dylan and Van Morrison, and supported locals like Johnny Nicholas and the Carper Family among others, promised she’d be back often. She’s not leaving immediately, so there remains an opportunity to catch her on slide guitar and dobro around town. Repaying some of the love she’s provided Austin over the decades, last night’s send-off burst with the profound emotion and sensational musicianship Cindy Cashdollar deserves.