Butthole Surfers drummer King Coffey was hospitalized on Friday night after being hit by car while loading in to a show at Trailer Space Records.

The venerable stick man was preparing to play a set with his new trio USA/Mexico, which features Shit & Shine bassist Craig Clouse (who performed with Coffey in Same Sac), and Owen McMahon of the Cherubs. While carrying his drums across Rosewood Avenue, a motorist crashed into Coffey. He was subsequently taken to Brackenridge Hospital, where he was treated for a fractured rib and wrist, and received 10 stitches on his head. 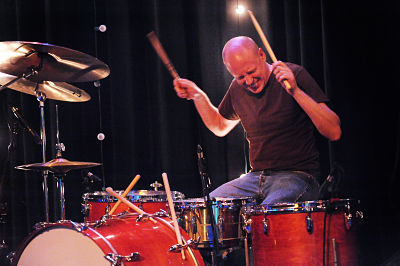 King Coffey performing with Same Sac at the North Door for Chaos in Tejas 2013. (Photo by John Anderson)

A worker at nearby East Side Pies reports that a crowd of at least 20 people gathered around Coffey, who was bleeding badly from the head and appeared unconscious. The Austin Police Department, Austin Fire Department, and EMS all responded to the scene thereafter.

On Monday, Coffey emailed the Chronicle in good spirits, confirming it was indeed him and not one his imposters that was hit. Followers of Coffey on Twitter know there’s at least one King Coffey imposter often angling for free drinks and photos with fans.

He offered some explanation of the accident.

“[The driver] made a left from Angelina, where Carver Library is, and didn’t see me crossing the street carrying drum gear. He had tinted windows, the streetlight was out, and I was wearing dark clothes, carrying black road cases – just a bad scenario.”

APD’s media representatives couldn’t say whether or not a traffic citation had been issued on Tuesday, because the crash report hadn’t yet been uploaded to their database.

Since Coffey’s snare hand is in a cast, which he’ll likely wear for two months, USA/Mexico has cancelled its March 3 booking at Hotel Vegas and is questionable for a March 19 daytime set at Beerland.

Coffey’s been a cornerstone in Texas’ underground music since the Eighties, first as a member of the Hugh Beaumont Experience, then famously with the Butthole Surfers, followed by Drain, Rubble, Sam Sac, and doubtlessly other projects we’re forgetting. He operated influential indie label Trance Syndicate Records locally throughout the Nineties. 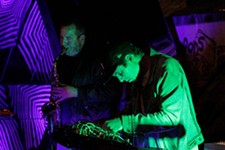