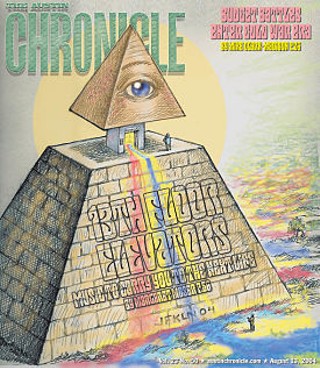 The all-seeing eye atop the pyramid has finally awoken. Fifty years after forming and 45 since their last show, Texan psych rock pioneers the 13th Floor Elevators will reunite to play the Levitation festival, May 8-10, at Carson Creek Ranch in Austin.

The one-off performance, confirmed this afternoon by founding member Tommy Hall, coincides with the band’s golden anniversary. Formed here in Austin in 1965 and releasing two genre defining LPs, 1966’s The Psychedelic Sounds of the 13th Floor Elevators and 1967’s Easter Everywhere, the seminal group dissolved after 1969’s Bull of the Woods.

This first-ever reunion will feature the band’s vocalist, guitarist, and native son Roky Erickson (who still lives in Austin), bassist Ronnie Leatherman, and original drummer John Ike Walton. Almost as startling is the inclusion of the Vators’ primary lyricist, electric jug player, and all-around visionary Tommy Hall. Mostly absent from music in the decades since the band’s breakup, his philosophies and fluttering, electric jug were essential to the group.

Hall, 72, fielded our phone call today from the hotel in San Francisco’s Tenderloin district where he lives. During an existential 25-minute conversation, he addressed the onetime locals’ consciousness-increasing existence.

“It’s all based on the hierarchy of ideas,” he explained. “That’s what the pyramid is. Then we climb that or advance along those lines.”

Can the Elevators still ascend the pyramid 45 years after the fact?

“Well, you try to find out what the different structural levels of the universe are so you go on this trip to understand that,” he continues. “Eventually, you realize that you have to go back to the beginning and figure out what caused it all. So that’s why this [reunion] has taken so long.

“For a long time, it was because I wasn’t in a stable environment. I had to be able to support myself. Finally I got settled and I can look at the beginning again.”

Do you still play electric jug?

“No I don’t. I’ve spent all my time doing all this work,” he says, referring to his journey of understanding the mathematical expressions of the universe, which he characterizes as a “quasi material abstraction.” “But I’m going to practice the jug and hopefully I can be as good as I was.”

Do you expect the Elevators’ message to connect with the new generations of fans seeing you at Levitation?

“Yeah, sure. When we we’re going on we weren’t very appreciated, but now the young people dig us. With the younger generations’ knowledge and their use of weed for good purposes, they understand the information. Once we have these ideas, it should change us physically.

“As we get the ideas, our perception increases.

“That’s part of the thing of the Elevators. That we’ll live forever. Once we understand the way the universe works, our minds will be ahead of our bodies and that should be the result.”

This reunion has been long in the works. The Chronicle first learned about it in mid November and since then it’s been on-again-off-again, according to those involved in its organization. This week, contracts were finally signed.

For Levitation, formerly known as Austin Psych Fest, 2015 lands its most impressive lineup in the event’s eight year history. Even before this historic reunion, which will no doubt draw Elevators enthusiasts from all around the globe, they were flush with headliners including Flaming Lips, Tame Impala, Jesus & Mary Chain, Spiritualized, Primal Scream, Austin’s Black Angels, and Thee Oh Sees.

Facilitating a 13th Floor Elevators reunion means something more than ticket sales for Levitation, which takes its name from a track off Easter Everywhere and is co-produced by a local collective calling itself the Reverberation Appreciation Society – also referencing an Elevators’ battle cry. It’s a justification for existence. 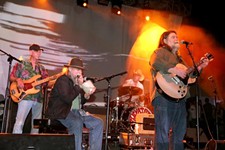 Levitation Live Shot: 13th Floor Elevators
No one can believe what they saw and heard Sunday night