A no-frills Eastside venue popular with Austin’s DIY promoters has been leased to new tenants and will cease to host live music. 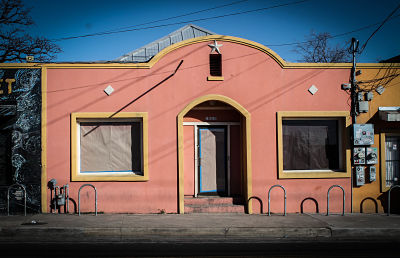 Eric Pavony, known locally as the organizer of the Brew-skeeball league at the Scoot Inn, confirmed Saturday he’s among the owners of a new business that’s acquired the space at 1810 East 12th, formerly known as the 1808 Annex. He’s holding off any announcement on the nature of the new business, which he expects to open in late spring.

The 1808 Annex, the eastern half of Club 1808, has intermittently hosted punk, noise, and hip-hop shows since at least 2008. The club’s history isn’t particularly well documented, but a Chronicle story about Thee Oh Sees from September 2008 refers to it as a “delightfully grimy new punk dive.” Since then, it’s gone through several iterations, hosting underground punk and metal promoted by Chaos in Tejas organizer Timmy Hefner, then going under the moniker “Booze Town Annex” in 2010 when booked by Romeo Sloss, and all the while serving as a key venue for Austin noise music scene.

Noise artist Johnathan Cash, who’s booked shows regularly at the 1808 Annex since 2010 – including his annual mid-March mini-fest Sux by Suxwest – has been forced to relocate upcoming events. The Annex’s hands-off management style was a perfect fit for the anything goes sensibilities of Cash’s events.

“I don’t enjoy working with venues and having to deal with money and stipulations. I like putting on big free shows where people can do whatever the fuck they want without consequence,” Cash, who performs as Breakdancing Ronald Reagan offered. “Gene [Mays, 1808’s owner] wouldn’t breathe down my neck about having 10 bands on a bill. He’d trust that I’d get it done by 2am.”

Cash noted that the public has warmed up the hardscrabble 12th and Chicon territory since he started booking there. For the the first show he promoted at the location, a touring band from Chicago was so scared of getting robbed that they refused to get out of their car, let alone play. These days, the strip offers several entertainment spaces that draw a middle-class clientele.

Cash considers the closing of 1808 Annex as a major subtraction for Austin’s noise scene and expects to see more house shows as a result. He was able to keep one date on the Annex Calendar, his fifth and final Sux by Suxwest on March 22, which will be the last show at the Annex as we know it. The new owners won’t keep it as a regular live music venue.

Ethan Smith, who frequently booked Club 1808 and its Annex including the annual Escapes Festival during South By Southwest, offered this eulogy for the venue: “Club 1808 was a place where people could go and be themselves and it didn’t matter who you were. Gene was always a gracious host and open minded about what he would book.”

Last year was a turbulent time for Club 1808/Annex. The venue made national news when media outlets including Billboard Magazine and Huffington Post reported that Rashad Owens had been scheduled to perform there at a rap showcase before his deadly SXSW hit-and-run. That claim remains dubious, but the Austin Police Department confirmed that the business was then under investigation by the TABC. In late May, Gene Mays leased the west half of his business – the Club 1808 side – to proprietors of a new lounge called Dozen Street, which has booked live music with an emphasis on soul.

As a venue, the 1808 Annex was a lo-fi operation. I played there a handful of times by virtue of it being four blocks from my home, and attended many of its shows. The room sounded pretty rough, the corner stage was awkwardly positioned, and sometimes its bar was a mess. One night, whoever was in charge forgot to buy beer.

Yet it was always available and that was the best thing about it. Even if no other stage would have you, the Annex would and for that reason, it was an asset for Austin’s underground. While this appears to be the end of the 1808 Annex, owner Gene Mays sent a surprising and frank email to the Chronicle, saying simply:

“We are moving to a new location.”