The Relatives’ heart and soul – back in God’s hands

Goodbye world, so long sin. Reverend Gean West of Dallas gospel soul survivors the Relatives died yesterday at Parkland Memorial Hospital at the age of 78. The gravel-voiced preacher was the musical and spiritual leader of a group that led one of the most improbable late-career resurgences imaginable. 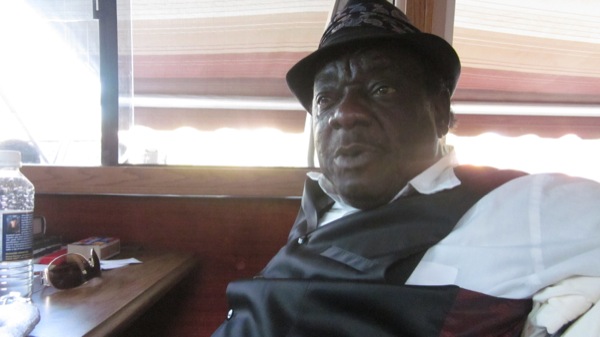 West’s health had been in rapid decline over the past year. He underwent heart surgery in August, and shuttled in and out of the hospital until his death. Even then, he sang until the curtain closed, laying down vocals for all but one track on a new Relatives album just last week.

“My life’s been raggly,” West told me nearly six years ago sitting in his tiny brick church in advance of Don’t Let Me Fall, the reissued LP that radically rewrote the final chapter of his life.

West was born in Marlin, just southeast of Waco, on April 3, 1936. He sang with gospel groups the Sensational Golden Knights, Mighty Golden Voices, and Southernaires before teaming up with his brother Tommie West to form the Relatives in 1970.

When the band folded a decade later, that might have been the end of the story had Austin record collectors Noel Waggener and Charisse Kelly of Heavy Light Records not chanced upon a busted copy of the Relatives’ 1971 single. Soon, a reunion show was scheduled. First came the warm-up at Tommie’s church in Dallas, followed by two nights at the Continental Club in Austin with Black Joe Lewis & the Honeybears.

That magical weekend connected the band with Honeybears’ guitarist Zach Ernst and hooked Spoon drummer Jim Eno, who jumped at the chance to produce The Electric Word for Yep Roc Records, the Relatives’ first new material in nearly 40 years. In its wake came festival dates from ACL to Australia, and shows from France to the Lincoln Center in New York. The band has since been featured on NPR and in The New York Times, and recently had a single reissued by Daptone Records.

“He went out right,” says Waggener. “Killer new record in the can, record deal and gigs on the books. He was an incredible human being Charisse and I were privileged to know. Reverend Gean gave life his all and did it with love.”

From here, the band plays on. Tommie has leveraged the lion’s share of lead vocals onstage in recent years, and Ernst reports that West urged the band to keep going in recent days.

Back at his church in 2009, Gean and I were an hour-deep into our interview when he asked if I had a copy of the recordings he’d been reminiscing about. He hadn’t heard the songs in some 30 years, and his daughter, who was with us, had never heard them at all. We put a disc of rough recordings on the loudspeakers, his deep voice filling the room.

His daughter cocked her head and smiled. West’s face lit up with pride.

“I felt like couldn’t nobody else do this but God,” he marveled, unaware of all that was to come. “Man, that’s been 35 or 40 years ago. I never would have dreamed that it was gonna happen like this, but it did. I just put it in God’s hands.”