Fables of the Reconstruction Part II

There are still remnants of destruction from Hurricane Odile when it hit the tip of Baja Peninsula last summer, crashing Alejandro Escovedo’s honeymoon. Dirt side streets throughout the small Mexican town of Todos Santos reveal wrecked homes and abandoned buildings. Brick walls in the alleys dismantle into piles of rubble.

The infrastructure slowly normalizes, though debris remains strewn in piles as reminders, and the horizon stretches more openly with many of the taller palm trees now fallen. Yet there’s no better sign of recovery than the return of Peter Buck’s Todos Santos Music Festival. Now in its fourth year, the event hosted by the R.E.M. guitarist, who has a home there, spans two weekends in January and benefits educational nonprofit the Palapa Society and hurricane relief efforts. 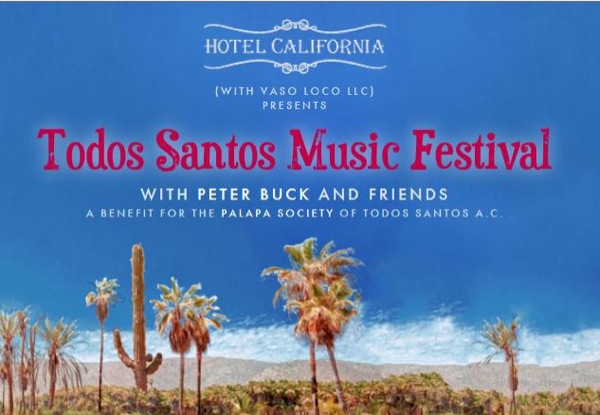 Whereas two years ago the festival felt like a gathering of Buck’s friends to jam out impromptu sets, this year it brought together its most impressive line-up yet, with acts including Conor Oberst, Dawes, Old 97’s, and Drive-By Truckers. The original core of festival performers remains intact, as well. Hard to imagine them not drawn back for a fourth year by the idyllic setting and town’s hospitality.

Steve Wynn, Chuck Prophet, Kevn Kinney, Joseph Arthur, Scott McCaughey, Linda Pittman, and Josh Kantor all set a casual and communal tone, reveling in the return to what they’ve come to call Peter Buck Band Camp. Buck and friends have ceded much of the spotlight to the newer acts. They provided opening sets rather than serving as the festival’s main attractions.

The first week, Jan. 15-17, hit heavily with classic alt-country and Americana, anchored by the Jayhawks and Old 97’s. The Autumn Defense, Wilco’s John Stirratt and Pat Sansone, headlined the first night in the courtyard of the Hotel California, though raucous sets from the Old 97’s stole week one, with Buck joining the Dallas quartet for a cover of R.E.M.’s “Driver 8.” The Jayhawks’ keen Americana pop lifted hits “Tailspin” and “Save It for a Rainy Day,” while also paying homage to Buck’s former band with “Talk About the Passion.”

Austin Pachanga Fest favorites La Santa Cecilia emerged as another undisputed crowd favorite of the first weekend, headlining Friday and Saturday night shows with their multicultural blend of cumbia, rock, bossa nova, and pop. Fronted by the powerful vocals of Marisol Hernandez, the Grammy-winning L.A. crew injected a feminine blush into the male-dominated lineup. In fact, they epitomized the cross-border creativity the festival seeks to foster.

The second weekend, Jan. 21-24, brought bigger crowds. An impeccable lineup of M. Ward, Dawes, Conor Oberst, and the Drive-By Truckers followed Buck’s all-stars on Thursday and Friday at the Hotel California. Those sets served as a warm-up for Saturday night’s free concert on the town plaza, headlined by the Nortec Collective.

With the plaza dampened by a slight but steady rainfall, Saturday’s show began with Kinney, Wynn, and Prophet leading the Buck band on covers including Prophet belting the Flamin’ Groovies’ “Shake Some Action” and Wynn turning in solid Dylan with “The Groom’s Still Waiting at the Altar.” McCaughey’s cathartic run through the Minus 5’s “Aw Shit Man” hit the opening set’s high note.

Following Joseph Arthur’s cosmic turn through Lou Reed’s “Heroin,” and live onstage painting as he sung “I Miss the Zoo,” M. Ward calmed the evening with immaculate acoustic picking through old favorites “Fuel for Fire” and “Poison Cup.” With Oberst joining him onstage, the two Monsters of Folk reunited to trade verses on Ward’s “O’Brien.” Reed received double tribute as Ward led the crew through “I’m Waiting for the Man,” then ranged high in homage to Alex Chilton on Big Star’s “Thank You, Friends,” Patterson Hood and Buck offering harmony.

Following Dawes’ roll through highlights from their three albums, the L.A. quartet backed Oberst through “Time Forgot,” “Hundreds of Ways,” and “Moab,” while Ward rejoined for “Soul Singer in a Session Band.” Digging deep by request, Oberst pulled from Bright Eyes’ catalog with a quivering “Going for the Gold.”

The Drive-By Truckers tore into the Todos Santos stage with their contemporary brand of Southern rock, and paid further tribute to Chilton with “I’m in Love with the Girl.” Wynn joined for highlight “Play It All Night Long,” before the stage filled to unload a raucous DBT closing favorite, Jim Carroll’s “People Who Died.”

For most of the crowd gathered in the plaza, Nortec Collective rightly provided the biggest draw, and after a quick stage renovation, the Tijuana outfit transformed the small Mexican town into a rave. Rain coming down and smoke machines and lights streaming, Bostich and Fussible took to risers like a caballero Daft Punk, remixing against the live norteño band complete with horns, tuba, and accordion. Like the Twin Tones’ surfiachi sound in previous festival lineups, Nortec’s electro-norteño explodes with a modern cross-cultural genre blend that expands and transforms traditional Latin styles to produce some of the most exciting music coming out of North America.

The Todos Santos Music Festival reached a new level this year, and as the town continues to develop, continued growth is a given. Given that Liz Lambert and the Austin-based Bunkhouse Group are designing a boutique beach hotel just outside of town that’s set to open early next year, the fest could easily become a destination event for many Austinites. Ready for Marfa south of the border?

Fables of the Reconstruction
Todos Santos Music Festival, on the edge paradise & progress