My Life As Marky Ramone

Brooklyn native Marc Bell, 58, lived a musical lifetime before renaming himself Marky Ramone and assuming his new namesake’s drum throne. Now, he’s penned an autobiography, Punk Rock Blitzkrieg: My Life As A Ramone. He appears tonight at the Long Center for a screening of 1979 cult classic Rock & Roll High School, plus a Q&A session, and book signing, 8pm. 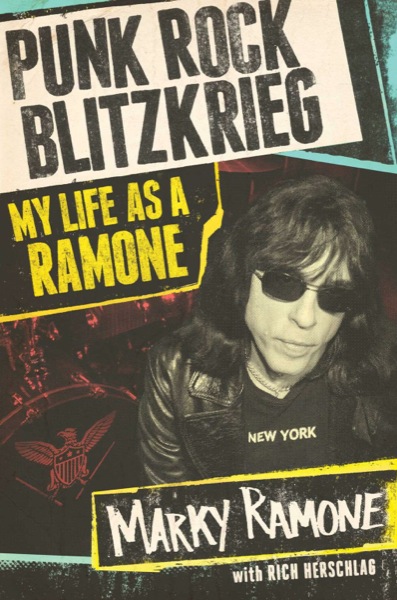 Austin Chronicle: You’d been a professional musician for over a decade by the time you joined the Ramones: Two albums with pioneering heavy metal trio Dust, proto-punk glam rock in Wayne County & the Backstreet Boys, obviously Richard Hell & the Voidoids. You brought a musicality to the Ramones they hadn’t enjoyed previously.

Marky Ramone: I wanted to make them heavier sounding, because of the bands I was in prior to the Ramones. [Original Ramones drummer] Tommy was good at what he did, obviously. I just wanted to make it a little heavier. That was the result, Road to Ruin, my first album with them.

AC: You play like a Sixties drummer, say Hal Blaine. You play the whole kit.

MR: I was heavily influenced by Hal, Ringo [Starr], Mitch Mitchell from Jimi Hendrix, John Bonham, and Ginger Baker. I loved Buddy Rich a lot, too.

AC: One of your book’s big revelations is that you were up for Billy Murcia’s drum spot in the New York Dolls after his overdose.

MR: He died in London, and when they came back, they wanted to continue the band. I was between groups. Dust, my first band, just broke up. I did an album produced by Andrew Loog Oldham from the Rolling Stones. [Estus, a Midwestern country rock act.] Then, I wasn’t playing in a group.

The Dolls called me up to audition, and here I am, doing all these Keith Moon drum rolls and John Bonham drum fills, trying to be very impressive. That wasn’t needed. Jerry [Nolan] just kept the beat, and that’s how he got the job. Good for him. I was happy for him.

Me and Johnny Thunders had the same birthday. We would always celebrate in a club called Max’s Kansas City. We were very close friends at Max’s Kansas City and CBGBs, where we all hung out.

AC: You mention in the book that Jerry felt a bit threatened by you?

MR: The thing is, me, Johnny, and [New York Dolls bassist] Arthur Kane went to the Dolls rehearsal studio once, just to jam around. And I broke Jerry’s drum head, accidentally. It was ready to go anyway, but then he kept hassling me about paying for the head. Every time he would run into me, I would run out of money or not have it on me or whatever, but I told him I would eventually pay him. Then the next time I saw him, I didn’t have it then, neither!

So, he tells me, “The next time it happens, it’s gonna come to blows.” I told him, “Jerry, anytime you’re ready. If you want to do it this way, I’m here right now. Let’s go outside.” Eventually, we let that stupidity stop, and we became friends.

There was always a competitive feel between me and him. At the time, we were the only main drummers on that scene, in that era. You had myself, him, and Peter Criss from Kiss – and eventually Clem Burke from Blondie. Like in life, you have a little competitive edge, and you’re a little leery of the other guy. That was how it was, but we respected each other. That was the important thing.

AC: You got to play on an album by legendary bluesman Johnny Shines.

MR: Johnny Shines was from the Mississippi Delta. He played with Robert Johnson. He was doing this album, and the owner of the company that was providing the finances wanted me to play on it. So, we all met – me, Johnny Shines, guitarist David Bromberg, a few brass players, and a bass player. Then we all got together in upstate New York and did the album. It was a pleasure to hang out with Johnny Shines, because he was one of the originators.

AC: You made an interesting observation about Richard Hell, especially when he first began in Television: That he was punk’s Bob Dylan. What tapes exist of Television with Richard sound a lot like mid-Sixties electric Dylan, just more punk. It’s a sound that was lost later, as punk progressed.

MR: Those electric albums that Dylan did from ‘65 to ‘67 are great. That’s the period I like Dylan. I think Television would’ve sounded a lot more like that if they put aside their disagreements and continued. The Voidoids album Blank Generation was a step up from Television’s albums to what Richard really wanted to do as an artist. Me, Bob Quine, and Ivan [Julian] put together that album with Richard.

AC: Your breakdown of the Ramones’ individual personalities is intriguing, especially politically.

MR: Johnny Ramone’s politics: I had to hear it, I had to deal with it [laughs]. I was in a band with him for 15 years. I’m surprised he didn’t run for President considering how much he talked about his conservative fanaticism. But in America, we’re lucky to be able to vote, and there’s a two-party system. Anybody who votes the way they vote, that’s their business.

Joey was the opposite, and I didn’t particularly agree with Johnny’s politics, either. And a lot of times, of course, there would be animosity because of their political disagreements.

MR: [Laughs] He didn’t care who ran for anything.

AC: Your story about how “Pet Sematary” came together was an especially good example of that.

MR: We were at Stephen King’s house. He invited us there for dinner in Maine, and he always wrote about us in his books. We were pleased to be invited, and when we went up there, he handed a book to Dee Dee. It was Pet Sematary. Dee Dee speed-read it! Dee Dee could read a whole book in an hour, an hour-and-a-half. He didn’t need to read the whole book. He read what he had to read, wrote the song, and it took him 40 minutes to write.

AC: That says a lot about his creativity.

MR: I know. I wish he were here to see all the adulation and respect for him. Unfortunately, he passed away, too. But the songs live on, and Dee Dee got to write that song for the soundtrack of Pet Sematary. Again, it was because of his imagination.

MR: Yes. I didn’t want to come across in the book as an angel. I have my idiosyncrasies like everyone else. If you’re gonna talk about other people, you’re going to have to talk about yourself. You’re going to have to be honest about yourself. I brought in the chapter about drinking because if I can help anybody, I’d be glad to. That’s why I put that chapter in there, because it wasn’t easy to stop.

Whatever I had to go through, I did, and I ended up sober. I was a periodic drinker – I didn’t drink every day. The first rehab was like a country club. The second one was like a military barracks. That’s why I said to myself, “I’m not going back there!” It taught me a lesson, and then I started staying sober. That’s what it took, and if it can help anybody? More power to them.

MR: [Laughs] What I did with that was I told the brewery what I wanted. They put all the ingredients together. I swished it around in my mouth, and then I spit it out. I was advised by a wine taster that that’s how you could do it without swallowing it. So I took his advice, and it tasted great! That was the result. It will be out everywhere. What I liked about it was part of the proceeds goes to Musicians Without Borders.