American television audiences first heard of Rebecca Loebe when she covered Nirvana’s “Come As You Are” on The Voice in 2011. Christina Aguilera spun around first to give Loebe the green light. Within seconds, Adam Levine followed suit. Loebe makes her hometown solo debut at Strange Brew on Feb. 5, 8pm.

Levine and Aguilera each vied for the local singer-songwriter to be on their team. Loebe went with Levine, citing his career trajectory as most similar to what she aspires to.

Levine commented, “That kind of creativity, just as far as the artistry of this whole thing, is amazing. I pressed the button because I felt it. I just had to do it. I love listening to you sing in such a genuine way.”

Aguilera said, “I have to tell you that I was really taken by surprise as soon as you started singing, and the choice of a song you were truly able to make your own. I found it inspiring. I think you have a really special gift.”

Loebe’s graceful and always has a smile on her face. People tend to fall for her just as hard as they do her music. She grew up in Atlanta, graduated her junior year, and headed off to study engineering at Berklee College.

She looks back at her experience on The Voice with awe.

“It was surreal in a number of ways,” says Loebe. “There were a lot of backstage machinations in the making of a TV show about music that were pretty overwhelming, not to mention the super secrecy of being involved in a brand new reality show, and the sudden burst of attention that comes from being viewed by 12 million people in one moment.

“I ended up on first season of The Voice because a guy I went to middle school with was living in Los Angeles and dated a woman who became a casting director for the show. Although they had already broken up by the time she got the gig, she still had the CD of mine that he had given her, and she invited me to come try out.

“I went to the audition because I figured they wouldn’t pick me, but that it might be a nice way to meet some showbiz types. At the very least, it would a funny story. I was very surprised to actually end up on the show.

“I think it helped move [my career] forward, although it’s hard to say exactly how. Things have improved bit by bit every year that I spend on the road, and the momentum of being on The Voice definitely helped keep that going.”

In 2008, Loebe was a finalist in the Grassy Hill New Folk Songwriting Competition at the Kerrville Folk Festival. She moved to Austin afterward, making good friends with another local folksinger, Raina Rose, after meeting her at the Folk Alliance International Conference that same year. Another Austin folkie, Matt the Electrician, produced her latest album, Circus Heart.

“Matt heard Raina cover one of my songs and came and introduced himself to me at another Folk Alliance a few years ago,” explains Loebe. “I felt really awkward, because I knew him by reputation and really admired his music. We exchanged CDs. He had just released Animal Boy and I had just released Mystery Prize.

“I plain wore his record out, so when it came time to make an album in Austin, I figured I should [hire] the producer whose albums I had obsessed over the most. Luckily, Matt said yes.”

Off the road, Loebe loves to fly kites, garden, cook, knit, and read. Good books inspire her, so with every one she finishes, she says her songwriting improves. Singing remains her bottom line.

“I love feeling like I’m hand delivering songs to people. Like, ‘Here! I made this for you! Does it fit? How about this one?’ I love watching people hear a song that moves them, the way their faces light up, or sometimes darken when their interpretation of the lyrics really sets in. 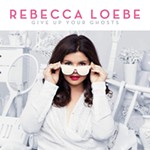 Rebecca Loebe
Give Up Your Ghosts (Record Review)