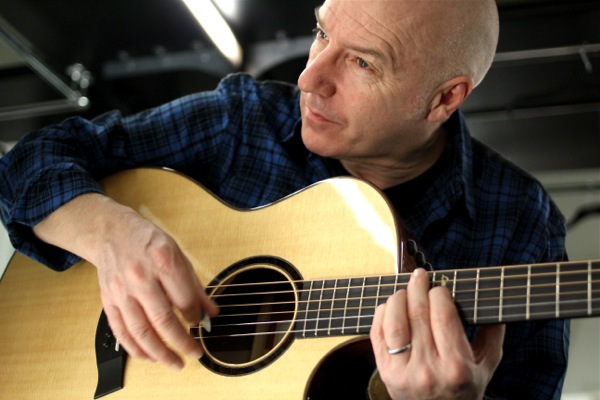 Austin Chronicle: Fragile, your first new album in a decade, features a lush, heavily electronic sound as well as your electric guitar work, and yet you’re promoting it with a solo acoustic tour!

MU: Yeah, well... I didn’t really think that through, did I? [Laughs] It’s very much a case of need. Here in the States, I don’t really have a label. I have a distribution label. And so far, I haven’t met anybody from the label! They haven’t been in touch, they haven’t asked me to do anything, they haven’t asked me for any promotional stuff. So, I instigated this acoustic tour to come out here and tell people about the album. The easiest way to do it – which is, oddly, also the most difficult way to do it – is to do it acoustically.

There’s a two-pronged attack. Part of the reason to come out and do this acoustic troubadour tour is obviously to talk about the album, because it’s really important to me. But I also want to do a documentary and document just how difficult it’s going to be for new artists, new songwriters, new musicians to go out there and sell their stuff, promote it.

I’m kinda giving myself this ridiculous task of touring America completely unaided: No crew, no tour manager, none of the normal people who would point me in the right direction and tell me what to do. I’m experiencing this for myself, so that when I go back to the UK and talk to young songwriters and young musicians who hope to make a living out of it, I can tell them all the pitfalls that I may encounter over the next few months.

AC: You recently helped revive the Band Aid moniker as Band Aid 30 to fight Ebola. Watching the YouTube video, not only did it make me feel my age, I didn’t recognize anyone in it except you, Bob Geldof, and Bono!

MU: The old school, yes! Well, when we were young, those of us in the music industry bought the magazines and trade magazines so that you knew who your contemporaries were. You knew all the artists. But you don’t do that later in life. You don’t buy the magazines, you don’t bone up on people. You may know the music, but you don’t necessarily put a face to the music. I realized I stopped doing that 10 years ago, when we did Band Aid 20! I had to look up what people looked like, because I was going to be meeting them. I was supposed to be in charge!

MU: This month, we will find out exactly how the record is doing. Because of the nature of what it is, the money takes a while to filter through. It’s not immediate, although we are getting the money way in advance of what a regular artist would get from a label. So, the money’s coming through.

Now the funding requests were coming in before the record was actually made. The demand was incredibly high to get safety equipment out there. To give you an example, there’s a school in the north of England, the middle of England, that I went to speak at a couple of years ago. This school was heavily involved with another school in Sierra Leone. They both got a hold of me just before Band Aid 30 was about to happen. They were telling me that some of the pupils they taught in the reciprocal schooling thing in Sierra Leone were burying bodies without any protective equipment whatsoever.

Now obviously Ebola is highly, highly, highly contagious. And they were picking up bodies with no rubber gloves, no masks, nothing. It’s just hideous! People don’t understand just how hideous this thing is! So, funding for this thing was not a problem. The infrastructure for Band Aid has existed for the last 30 years, so the funding process is already there. To switch for this period from putting money into what was initially eradicating hunger to Ebola isn’t a difficult thing to do. The funding process has already started.

I’m looking at my emails today, and already, I have reams of funding requests to look through. The money is coming in the next three weeks, so those requests will be getting funded straight away.

AC: Do you and Sir Bob Geldof get some sort of writer’s royalties from “Do They Know It’s Christmas?”

MU: That was part of the reason for writing a song. It’s not the best song in the world. It’s okay. When we met up 30 years ago and talked about this, the obvious thing to do would have been to do a cover version of a classic Christmas tune. But 50 percent of the money generated by a record, as you well know, goes to the writer. So Bob and I wrote something, and we donated the royalties to the Band Aid Trust.

AC: You downplay the song, but you actually wrote a Christmas classic.

MU: Well, we didn’t at the time [laughs]. We wrote something that was pretty weird! Again, it’s not the best song in the world. It’s got a strange structure. There’s no chorus, other than that singalong thing at the end. But it was a tall order. We didn’t want to write something about jingle bells and crispy snow and logs in the fire that every Christmas song has in it! We wanted to tell it like it was.

It’s quite a brutal, brutal song in a way. There’s that line, “And the Christmas bells ringing are the clanging chimes of doom/ Well, tonight, thank God it’s them instead of you,” that Bono sang. It’s quite brutal. It’s really honest and in-your-face, and we wanted that punk ethos associated with it. We wanted it to be absolutely clear what it was all about.

So, it was a valid song, yes. But it’s grown into something. You now see kids doing Christmas shows or whatever, singing “Jingle Bells” and “Rudolph the Red-Nosed Reindeer,” then launch straight into “Do They Know It’s Christmas!” And it’s incredible how this song has weaved its way into the Christmas psyche!

AC: You briefly touched upon having a punk background, having been in ex-Sex Pistol Glen Matlock’s band the Rich Kids before you were in Ultravox. When you were a Rich Kid, you got to work with a dearly beloved musical transplant to Austin who recently passed away, Ian McLagan.

MU: Mac! Yes, yes! He was a lovely, lovely man. Both Glen Matlock and I were massive, massive Small Faces fans, and Mac was just great. When we were making the only album the Rich Kids made, Glen wanted some kinda boogie woogie rock piano. So our producer [David Bowie guitarist] Mick Ronson said, “Why don’t we get Mac to come and do it?” And he did. He was fantastic! He was an adorable guy.

He ended up coming on tour with us, so Mac was onstage with the Rich Kids! And Mick Ronson was guesting on guitar! It was a boyhood dream come true. It was wonderful. So it was just terrible seeing Mac pass. He was still a young man. And he was working up to the end, as well!