Austin’s voter turnout was atrociously low through this month’s run-off elections for mayor and City Council, but the Wednesday (yes, one day earlier than usual) arrival of this week’s paper affords Austinites an opportunity to vote on something much more interesting: the best bands, musicians, clubs, and music related services in the city. 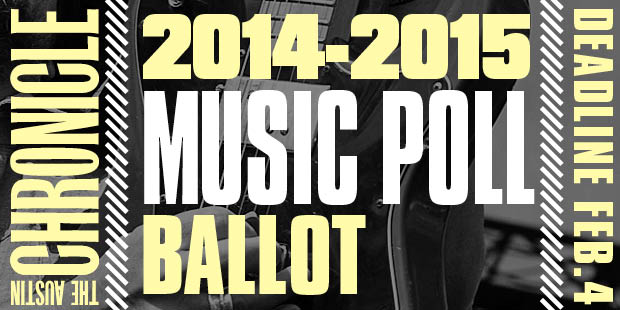 Ballots for the 33rd annual Austin Music Poll can be found in both print and online that day. Like always, it’s based entirely on write-in (or electronically cast) votes, allowing the community – and not just those pretentious music critics – to choose who in our city deserves formal recognition for their work.

In the first ballot in the post-Moser era (Austin Music Awards founder Margaret Moser retired last year) the categories have undergone some necessary tweaking. Best Roots Rock has been abolished (sorry Wheeler Brothers, holders of the crown these past three years), as has Best Instrumental; previous candidates must now be voted in a specific genre. Latin Rock and Latin Traditional have been combined due to historic voter overlap, and Best Electronic Dance Music Act has been updated as Best EDM/Dance. Adding to that, Best Blues Act expands to include Best Blues/Soul/Funk, and Best Acoustic Guitar (taken in 2013 by hollow body electric playing Shakey Graves) folds with Best Electric Guitar to become simply Best Guitar.

The Austin Music Industry Awards breaks off as an independent, second event, taking place Monday, March 9, 2015. That date, preceding the melee of South By Southwest, will allow those working in the many businesses supporting the local music industry to honor their own. I’ll host the event, along with fellow Chronicle staffer Chase Hoffberger. We’re both looking forward to playing a hand in an event designed to celebrate the nuts and bolts of our music scene and honor those who work a range of trades too rarely celebrated.

The Austin Music Awards, featuring top honors for bands, artists, and individual musicians, as well as one-of-a-kind live performances, will run during SXSW on Wednesday, March 18, 2015.

The 2014-15 ballot also features a diverse crop of nominees for Austin Texas Music Hall of Fame, a top honor for Austin’s veteran music makers. For those 12 local legends, you’ll have two opportunities to vote.

To let your voice be heard, find the Austin Chronicle Music Poll in this week’s issue, fill out the Music Poll ballot, and mail it in before Wednesday, Feb. 4, or fill it out online here.