I’m on the phone with my father, Jon Dee Graham, while he’s hesitantly driving through snow on his way from Illinois to Kansas. Waiting for his return at this time of year is typical of my family. Although the lives of traveling musicians take a toll on their families at the holidays, my dad always makes it home for Christmas.

JDG rarely gets to select our Christmas tree, but he did hang big, fat, colorful Christmas lights before he left on tour after Thanksgiving. He returns in time to play a holiday show we put together at Strange Brew on Saturday night. The multi-generational bill stacks high with James and Curtis McMurtry, Sara Hickman and her daughters Io and Lili, us Grahams, and the Mastersons, whose frontwoman Eleanor Whitmore welcomes her sister Bonnie. 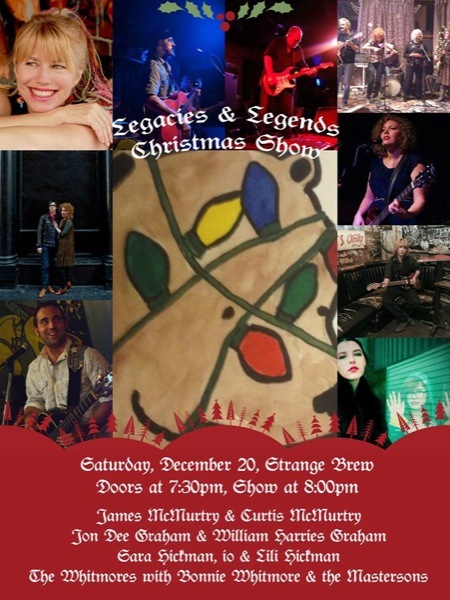 “The best part about traveling during the holidays is that you get to experience the different ways people celebrate the holidays,” says my housemate. “The other night we were in Bloomingdale, Illinois, and people go nuts about holidays. There are decorations everywhere.

“The hardest part,” he sighs, “is that I don’t get to spend more time with my family.

“My favorite Christmas memory is Christmas on the border. It’s very remote and really dark at night, and there’s zero light pollution. The oil drillers and the rough necks put seven-volt Christmas lights on the giant oil rigs.

“When you’re driving at night on an old ranch road, you can see the lights in the distance and it’s magical.”

“I was at Whole Earth Provisions and noticed a man under a thin blanket behind the store. It was 28 degrees in the early morning. I tapped him on the shoulder and his swollen face peeked out. He told me he’d been hit by a car. I walked him to a Starbucks for hot coffee and a muffin.

“People were staring at us because of his weathered clothes, his smell, and the condition of his face. We sat quietly while he drank slowly. When he was finished, we went into Whole Earth to get him a sweater, wool socks, a hat, and gloves.

“As we began looking at different items, I realized how expensive the store was and as a musician, I was thinking about how my rent was going to be gobbled up.

“Suddenly, a young man behind the counter called me over. I told my new friend I’d be right back. The sales clerk whispered to me, ‘Are you two related or is that guy homeless?’

“I said, ‘No, we’re not related, but he’s going to freeze to death. I need to get him some warm things to wear.’ The clerk said, ‘Let me get my manager.’

“He came back and said the manager was going to give me 50 percent off everything. We walked outside, waving goodbye to the kind clerk and manager, and then, as I turned around he was gone. It was as if I’d imagined the entire thing.

“The best part of Christmas is meeting the angels I believe I meet.”

Curtis McMurtry tells me his family is pretty casual about Christmas, while recalling his father James McMurtry mostly being home for the occasion.

“One time I woke up and saw my dad putting presents under the tree, and I thought he really was Santa,” laughs the third generation writer. “He wasn’t dressed like Santa or anything. My dad just really looks like Santa in dim lighting.”

Eleanor Whitmore recalls her favorite Christmas as one occurring a couple of years ago when her family all got stuck together in Dallas during an ice storm. Her sister Bonnie concurs.

“This year was the first time my sister and I resolved the fight for good. It’s now prominently displayed on my sister’s tree,” she laughs.

“Pretty lights on the string, Wrap the town in red and green. In the street, little children sing ‘Silent Night.’ Well, alright.

Once in a while, clubgoers are taken aback with the chorus to my father’s song “I Hate Christmas.” Then, they’re greatly relieved to hear the punchline. Dad loves that, often exclaiming, “What kind of monster did you think I am, suckers?”