Pick of the holiday album litter 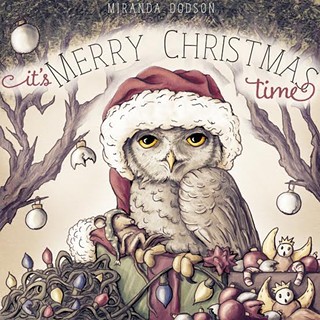 Instead of recording whole Christmas albums, many artists now release a song digitally and offer it as a free download – like Austin’s Erin Ivey. On the other hand, the Largehearted Boy blog offers legal downloads daily, and there’s ample holiday mp3s. Even so, plenty of Xmas discs abound this year, so let’s jingle some bells.

Locally, the Xmas-Men tops the stack with Santa is Real, an instrumental collection of classic tunes. When not hitting the egg nog, they’re Robert Earl Keen’s band: Rich Brotherton, Marty Muse, Bill Whitbeck, and Tom Van Schalk. Together, these music pros brew up inspired country arrangements, while welcoming Floyd Domino and his piano for a deviously sweet take of Keen’s classic “Merry Xmas from the Family.”

Highly recommended for those who think The Ventures’ Christmas Album remains the only seasonal platter that matters.

Miranda Dodson offers It’s Merry Christmas Time, a four-song EP with two original tunes, including the slow-building title track. It serves as a charming and impressive introduction to the Austinite’s powerful music stance, so we’ll definitely check out her next gig.

The most soul satisfying new disc comes from the Blind Boys of Alabama and Taj Mahal on Talkin’ Christmas!, a gospel-blues hybrid refreshing for its boldness, inspired musicality, and – save for a stylish reading of “Silent Night” – lack of the same old songs. The sweetly sung “There’s A Reason We Call It Christmas” and deeply funky title track stand out on an album filled with the true spirit of the season.

Those that revel in harmonies are sure to fall in love with the Living Sisters. Folkies Eleni Mandell, Inara George, Becky Stark, and Alex Lilly twist their voices into a variety of settings and recall stylists from the Andrews Sisters to the Beach Boys on Harmony is Real: Songs for a Happy Holiday. Original tunes recall the sass of the Waitresses, and covers like “Jingle Bells” and “Little Drummer Boy” are handled deftly with a touch of originality.

Fans of Cincinnati-based duo Over the Rhine will delight at the all-original seasonal release Blood Oranges in the Snow, their third album of Christmas-themed music. Linford Detweiler and Karin Bergqvist create haunting soundscapes worthy of the Cowboy Junkies and Emmylou Harris at their most passionate. Check the latter’s warbling rendition of Merle Haggard’s “If We Make It Through December,” which aches in all the right spots.