Weezer’s emotional sophomore disc, 1996’s Pinkerton, embarrassed author Rivers Cuomo as a perfect vignette of his tortured sabbatical at Harvard. In 2001, The Green Album then traded “Tired of Sex” for “Island in the Sun.” Twenty years after its debut, on Tuesday night at a sold-out Austin Music Hall, none of the L.A. quartet’s catalog was off-limits. 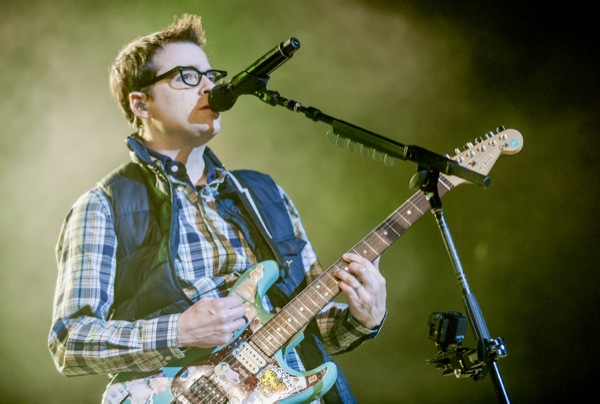 Lighting up “Hash Pipe,” Cuomo bounced unassumingly, looking straight out of the Nineties in his plaid button-down shirt and puffy blue vest. His urgent mumble paired well with the adolescent sweetness of “(If You’re Wondering If I Want You To) I Want You To,” couples in the audience already serenading each other anyway. Power pop anthem “Da Vinci” introduced the band’s seventh studio LP, October’s Everything Will Be Alright in the End.

Cars frontman Ric Ocasek, who tuned Weezer’s raw geek potential into their enduring 1994 debut, returns on Everything, which hits the elusive happy medium between Cuomo’s eclectic tendencies and lust for meandering guitar solos. The step Weezer tried taking with its sound on 2009’s ill-received Ratitude succeeds on Everything. Take comfort in the fact that Cuomo’s still a sucker for a “Lonely Girl.”

“Say It Ain’t So” yielded wild shrieks, a sign that while the new material went over well, it’s the old hits that keep the show afloat. Cuomo winked at Weezer’s checkered past with “Back to the Shack,” admitting, “I forgot that disco sucks.” How can he be making lost-kid rock after 20 years and still have it ring true?

Even the brief pause between cheerful closer “Pork and Beans” and the first of the two-song encore was too long for the crowd pushing toward the stage and those craning their necks from the balcony. Bros went ballistic at the opening thrum of “Undone (The Sweater Song),” barking the lyrics to each other in undisguised glee. A gangly teen stage diver set sail face first.