The Blacker the Face

Not to make this tinder for some sociological or music debate, but I’m going to light a match anyway, just in case, and put on my “hater” cap. Sunday, Iggy Azalea won an American Music Award for “favorite” hip-hop album over Drake’s Nothing Was the Same and Eminem’s The Marshall Mathers LP 2. How is this possible?

This could seem mostly innocuous, especially when you consider award shows are mostly a sham to begin with. Given the award criteria (“favorite”), that line of thought is solid. There’s a voting apparatus on the award site for the public, but no mention of how votes are tallied, or eligibility. Additionally, only a handful of pre-selected albums are voted on in each category.

In other words, vote engineering isn’t completely out of the question.

Either way, no remotely serious rap fan would have voted for The New Classic for anything. If you believe the AMAs would allow a straight public vote, then by the album’s win, you know who voted for it: young, white, women who for whatever reason knew when and where to vote, and had the time and care to do so.

Going back to the Grammys in January, Macklemore won Best Rap Album over arguably the best rap disc of the past decade. To his credit, he’s a former underground MC who put out something that penetrated the mainstream with the help of some strategic marketing and record placement. There’s a saying in black culture that feels applicable to Macklemore: “I'm not new to this, I’m true to this.”

The Australian rap artist, on the other hand, comes off as farcical – a WWE gimmick. Even in the pro wrestling ring that rap music can be, Iggy Azalea and Amethyst Amelia Kelly aren’t one in the same other than they share the same body. She isn’t a rapper. She’s playing one on TV – one with somebody else’s lyrics memorized, stereotyped African-American mannerisms, and a manufactured Southern accent.

While Macklemore and Eminem have acknowledged “white privilege” as direct contributors to their success, Iggy’s act has moved squarely into new age minstrelsy, blackface for millennials. Co-opting of black music isn’t a new phenomenon by any means. However, her “artistry” is particularly damaging, specifically in its validation through mass outlets (like a nationally broadcast award show). Though problematic in and of itself, in actuality she’s only a symptom.

Macklemore knew he wasn’t the right winner, and voiced this sentiment on the spot. Conversely, Azalea found her victory deserving, a sign of validation however twisted.

When the Seattle MC bested Kendrick Lamar, it was largely seen as either a shruggable moment or a political move, which is to say, at best, the latter was denied in order to get a point across. Knowingly or otherwise, The Heist’s win (and temporary political usage, if this was indeed the case) actually degraded rap music’s value in the long term through denial of what should have been a crowning moment for the ceremony’s lone singular piece of art.

Coming forward, and pushing the jagged sickle even deeper, Azalea’s win didn’t only devalue rap music further. It validates continued mockery of African-Americans via the stereotyping of rap music. It says “putting on black” will make you successful in 2014 as long as you can put out a “Fancy” song and dance to it.

Perhaps soon, people will vote for a colorized version of The Jazz Singer, to be shown in 4K resolution at the Alamo Drafthouse. That sounds about right. 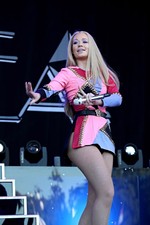