Best music I saw during South by Southwest this year? Dwight Yoakam at Rodeo Austin. Work hell meant yours truly took in exactly two acts at the festival, for which my antidote has become spending the last Sunday of SXSW at the Travis County Expo Center. My wife and I hosted The New York Times and Rolling Stone for Yoakam – returning to that same Sunday in 2015.

My dear friend David Fricke had ventured north a decade ago for Rodeo Austin, but Jon Pareles from the world’s premiere daily hadn’t been. Guests of honor in the house, the Rodeo set us up with the best seats in the arena: directly above the bull chutes. Wild horses couldn’t drag us away. 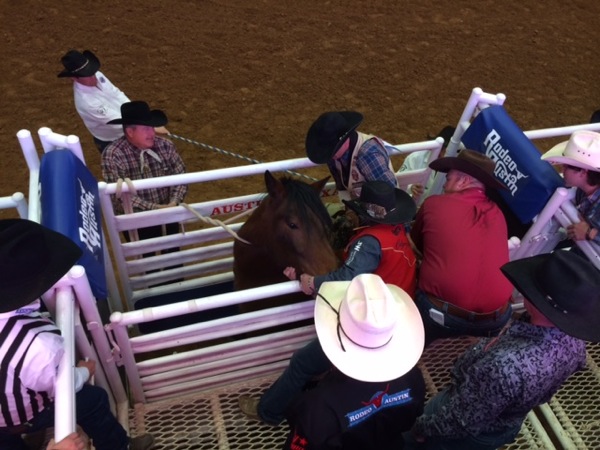 Yoakam put on an explosive, unbelievably Texan performance, every bit as country and western – not to mention electrifying – as a ton of beef busting to get the cowboy off its hump. Agnes and I had been there a week earlier to see Loretta Lynn, but generally the Rodeo’s coinciding with the run-up to SXSW means we can’t take in as many pig races and mutton bustin’ as we’d like. Good news in 2015 is that the Rodeo leaps forward like spring’s daylight savings time so that most of it occurs after the music festival to shame all other music convergences, Mar. 14-28.

Still a few TBAs on the schedule – announced this morning – but as usual, there’s something for everyone. Time to start shopping for our toddler’s first pair of cowboy boots.