Oakland Raiders receiver Fred Biletnikoff had flypaper hands, jack rabbit moves, and elusive grace over the middle. Slayer is none of these things, but when Kerry King approached the drum riser to commune with Paul Bostaph and revealed the football Hall of Famer’s name on the back of his jersey, the unholy tie between brute sport and thrash metal roared. 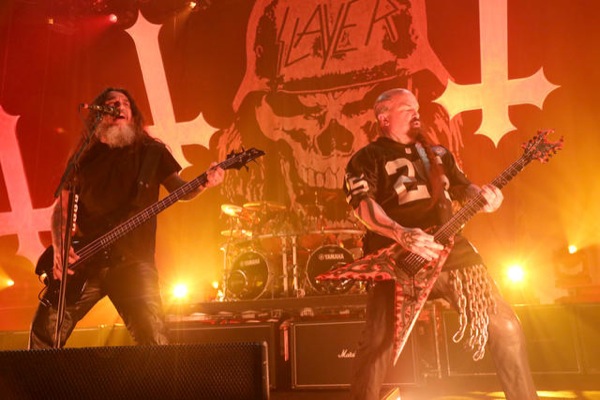 Stabler to Biletnikoff: Araya and King at the Moody, 11.18.14 (Photo by Gary Miller)

ACL Live at the Moody Theater has hosted outsize superstars from Radiohead to Bruce Springsteen, but its Tuesday sell-out crammed the 33-year-old SoCal crushers into an intimate (and metaphorical) corner the quartet was only too happy to pound its way out of. One hundred minutes of just plain pummel had Austin standing in the balcony and surfing on the floor. Only front lion Tom Araya failed to bang his head.

The two-time Fun Fun Fun Fest headliners fill fields across the globe, but theaters remain their haunted chapel. For its first indoor Austin show since La Zona Rosa in 2002, Slayer dispensed with any and all pretense beyond a few backdrop changes. Neither as tight as either of its Auditorium Shores sets (2011/2013), nor as cataclysmic as inside the 1,500-person onetime Tex-Mex eatery, the group delivered fast, hard, no-frills bludgeon. Precisely what fanatics demand.

Opener “World Painted Blood,” “Hate Worldwide” third, and “Snuff” late in the run refuted the underrated stature of 2011’s World Painted Blood, but “Die by the Sword,” “Hell Awaits,” and early tandem “War Ensemble” and “Mandatory Suicide” constitute the “hits” moving tickets at a record pace. This may be the first band for whom a shrieked “Fuck you, Slayer” screams ardor.

Has Araya been neutered by neck-bolt surgery? Surely. At points throughout the show, a slight head bob only underlined the ardent desire to whip his mane like an industrial dryer, and his audible rasp missed a head craned to the heavens with an open throat, but that may have simply been tour vox fatigue.

Twenty minutes in, the singer paused to take in the Moody. Standing there surveying the black hall, he prompted applause until the house was chanting the band’s name. Even Slayer songs can’t match that primal worship.

Now that co-founding guitarist Jeff Hanneman has descended to hell (hopefully and with deepest respect), Kerry King leads the band with an even greater blunt force trauma. Bostaph keeps up where original engine Dave Lombardo led, but Slayer 2014 might just boast the most harmonious line-up since its earliest days. Hanneman replacement Gary Holt of openers Exodus, which preceded Suicidal Tendencies, engages with and plays off King with a greater empathy than his predecessor.

No guitarist can replace Hanneman (1964-2013), honored by the band with a Heinekin backdrop during his signature composition “Angel of Death,” yet Holt fits slayer like a “Dead Skin Mask.”

“Seasons in the Abyss” rang everyone’s clock, but “Raining Blood” generated unmatched combustion. Encore “South of Heaven” tolls the apocalypse still, while Josef Mengele rots in his wormhole to its rejoinder “Angel of Death.” Twenty-one tunes to peel your flesh.

Slayer sets that brutality to music so that only audience-tossed meat puppets get bruised, while the rest of us salve our inner wounds with a shit-eating grin and/or grimace.