On Fun Fun Fun Fest’s third and final night, as nighttime temperatures plummeted, Neutral Milk Hotel appeared out of the midst of its own reclusiveness.

With only two LPs before its sudden 1998 hiatus, the Louisiana collective took indie rock by surprise last year with a full-fledged reunion tour, which included a sold-out performance at the Moody Theater. Notoriously elusive frontman Jeff Mangum took the stage solo, lacking any resemblance to prior press photos. 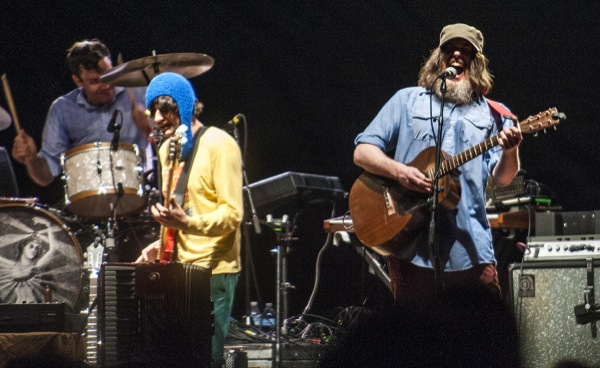 Now bearded and burly, the songwriter dug deep for his cult with opener “I Will Bury You in Time,” a rare track from 2001’s Live at Jittery Joe’s. “Holland 1945” welcomed a mighty band of horns, violin, and accordion onstage, the song’s lyrics rich with references to Anne Frank, the believed subject of Mangum’s 1998 masterpiece In the Aeroplane Over the Sea. Sixteen years since its release, Mangum’s voice carried solidly, each song captivating a transfixed audience unfazed by competing headliners mere yards away.

“I love Austin so much that I almost moved here back when I was homeless,” revealed the bandleader.

Aeroplane closer “Two-Headed Boy Pt. 2” ended a set banning cell phones with lighters held aloft one by one, a wistful, welcome image in an awe-inspiring 75-minute performance. Mangum thanked the crowd and waved, leaving fans cheering long enough for them to begin doubting the group’s return.

“This is a lullaby,” he said, finally back onstage for 1998 B-side “Engine,” Julian Koster swapping his bass for a bow-brushed singing saw. Afterward, Mangum again stroked his legions.

“Thank you, my friends,” he motioned, exiting hand-to-heart. “I love you, goodnight.”