“I much prefer the mundane,” Courtney Barnett concluded drily on “Avant Gardener,” breakout track from recently repackaged double EP A Sea of Split Peas. Easy to understand how her droll delivery atop sparse, raw rhythms would make one wonder how the Australian songwriter’s charming but unusual delivery style might play to a festival crowd.

Luckily the riffs won out. Barnett and her quartet emphasize the licks more than the lackadaisical. 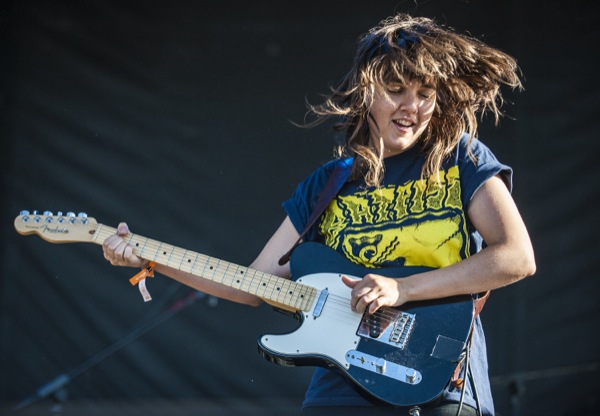 Opening with “David,” the bandleader rocked like early Holly Golightly, which continued through “Lance Jr.” and its scorching outro and massive jam that refused to end. Barnett’s lyrics may be winding and deadpan – casual in their banal subject matter – but the shredding pushes back on the ennui as if thrashing against the boredom and drab, everyday apathy.

“Don’t Apply Compression Gently” dropped the set back down to a straighter rhythmic twang, but not without shots of guitar. Likewise the heavy bass underpinning on “Out of the Woodwork.” “Are You Looking After Yourself?” built to an increasing roar, while new songs “Blah” and “Pedicure” ranted through existential crises, with "Blah" declaring ambivalently, “I wanna go out, but I wanna stay in.”

The latter unloaded more lyrics than most bands’ entire catalogs.

By the time Barnett uncorked “Avant Gardener” as the penultimate tune, its straight, dry delivery came off as the least compelling of the set despite its fuzz of charring distortion bleeding into the spiraling, almost manic “History Eraser.”

Like the rise of fellow Oceanian Lorde, Barnett fights off millennial malaise. Whereas the former rebels through ironic appropriation and grandiosity, the latter cuts to the bone with a raw punk ethos and equally impressive literary wordplay. There must be something happening amid the nothingness Down Under.