“What’s the name of that fucking band playing,” challenged Mark Kozelek to an uneasy crowd clearly familiar with the frontman’s recent beef with the War On Drugs. “Just kidding, whatever you’re called,” he waved toward Run the Jewels’ concurrent set. “I love you guys.”

Backed by a trio, the denim-clad singer stood tall, hand planted in pocket for opener “Michelin,” which led straight into “I Can’t Live Without My Mother’s Love,” both from February’s Benji.

“All you Austin motherfuckers – shut the fuck up,” he countered, unable to shake the sound wafting from surrounding stages.

Three songs in sans guitar, Kozelek finally strapped on his acoustic for 2013’s “Hey You Bastards I’m Still Here,” a welcome variation to a set teetering on tiring.

“Play the War On Drugs song!” requested a fan, referencing the songwriter’s recent band-basher, “War On Drugs: Suck My Cock.”

“We’ll play some beer commercial lead guitar,” he quipped, again slighting the Adam Granduciel-fronted group whose sound bled into Kozelek’s during September’s Ottawa Folk Festival. From sour to sweet, the Almost Famous actor then pledged a penchant for Austin.

“I say this sometimes and don’t mean it,” he began, pacing the stage. “But I mean this: I fucking love Austin.” 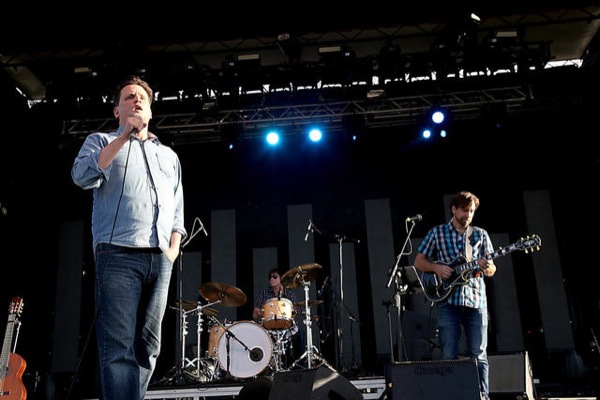 “I mean this: I fucking love Austin.”
(Photo by Gary Miller)