Midway through Fun Fun Fun Fest’s first day, the grounds felt unusually spacious. Stage views were great and no lines at the bar. It was ideal. Except for the thousands of fans waiting outside in the will call line, which, at 5pm, extended down Riverside, across the South First pedestrian bridge, and onto Cesar Chavez all the way to Congress Ave. 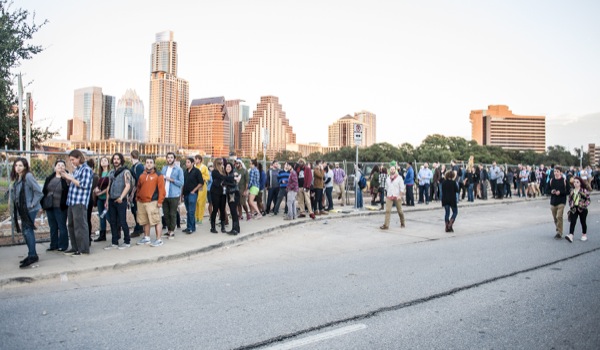 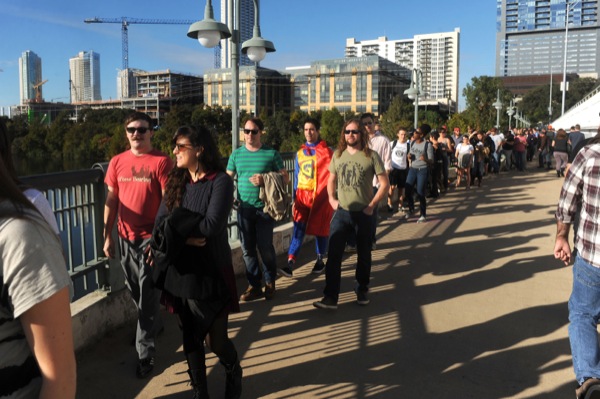 Across the South First pedestrian bridge (Photo by John Anderson) 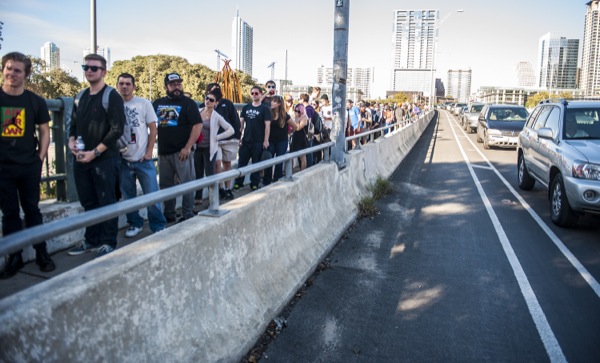 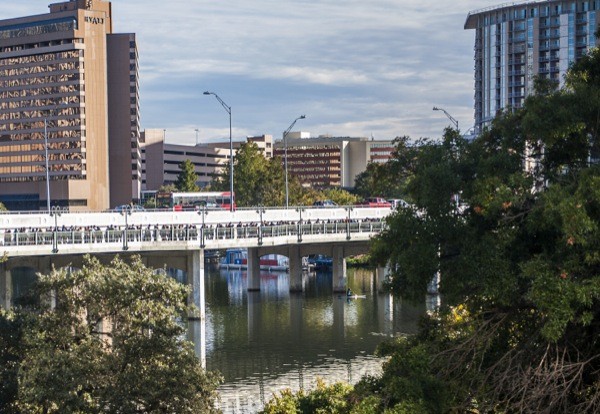 The epic queue fumed. Some were heartbroken they’d missed Run the Jewels. Some screamed “Refund!” Some girls peed underneath a semi trailer because there was nowhere else to go.

“I’ve been waiting for three hours and 20 minutes,” said one young woman finally nearing the festival entrance. “We got in line at 2pm when it was halfway across the bridge and now it’s 5:20pm and we’re still in line.

“I came to see a variety of acts, but I’m already missing my number two favorite, which is Ginuwine. They need to offer refunds.”

The man walking the line with a cell phone and a bag of wristbands, expediting entrance and generally working his ass off, was none other than Fun Fun Fun Fest owner Graham Williams. You know it’s a serious situation when the owner of the festival is outside checking people in.

I asked Williams for a rundown of the situation and he said they’d just doubled their box office staff. He also acknowledged that 30% less people had picked up their wristbands early than last year. Early bird will call ran Thursday, 4pm-midnight, at Auditorium Shores and Holy Mountain.

I asked one group of FFF Festers waiting in line why they hadn’t picked up early and they said because they didn’t want to deal with parking downtown on a Thursday night. In retrospect, that would have been a minor hassle compared to the half-mile-long line.

When asked if refunds would be offered, Williams said customers with questions regarding that matter can contact the fest’s production company Transmission Events.

Afterward, much later in the evening, Fun Fun Fun Fest updated its Facebook page to announce that after consulting with city officials, they took “drastic measures” and allowed the remaining line into the festival regardless of check-in. They then kept the box office open after hours to accommodate fans needing wristbands for FFF Nites and opened today at 8am.

They also noted, “Since 2006, FFF has operated under a strict no refund policy, which remains today.”