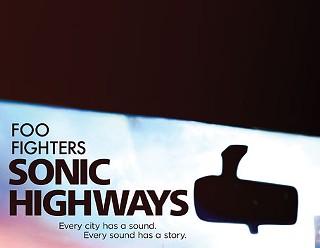 Watching a documentary at UT doesn’t sound like the most exciting evening, but Thursday’s sneak preview of Sonic Highways’ Austin edition was a blast.

Arriving at KLRU Studio 6A, where the Foo Fighters taped performances for the HBO series, Dave Grohl called out a lookalike in the small audience.

“What’s up dude that looks exactly like me,” Grohl ribbed an Italian citizen who flew to Texas to witness the Foos’ Austin City Limits taping tonight – postponed yesterday until Nov 20. “I’m sorry you have to look like me. That sucks.”

Also in the audience was Austin guitar cornerstone Jimmie Vaughan, whose accounts of the homegrown scene are heavily featured in the series’ local installment. No one got more face time in it than ACL Executive Producer Terry Lickona, whose interviews were the episode’s centerpiece.

“We’re about to see what I believe is the best documentary about the Austin music scene that’s ever been produced,” announced Lickona by way of introduction.

Hearing that praise must have been a relief to Grohl, who told the Chronicle Wednesday, “When I make these episodes, my most important critics are the people in them – that they feel like I’ve done them justice.”

“Going to a city for a week, talking to all of the legendary musicians from that city, letting the city get under your skin; By osmosis, all of that city’s energy and the pace and the tempo and the accent makes its way into what you do,” explained Grohl to the crowd.

“The first time I came to Austin it was 1987, and I was in a punk rock band – before I was in Nirvana. I was like, ‘Shit, we gotta go to Texas? We’re dead fuckin’ meat’ – purple hair, all scruffy. Then we pulled into Austin and it felt like home. I thought it was filled with open-minded, beautiful, artistic people who like to get fucking weird.”

Sonic Highways’ ATX chapter airs tonight on HBO, 10pm CST. It closes with a new Foo Fighters song about Austin called “What Did I Do? / God as My Witness,” with Gary Clark Jr. on lead guitar. Grohl acknowledged that Clark had arrived to the session sans axe, so Foo’s guitarist Pat Smear let him use a Gibson SG, then told him to keep it because it would never sound that good again.

The Foo Fighters celebrate their 20th anniversary next summer with a Fourth of July blowout in D.C. at RFK Stadium with none other than Gary Clark Jr. 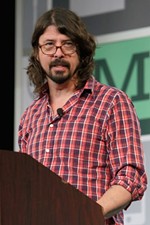 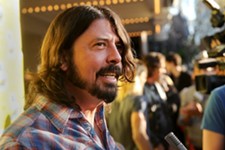