The CMJ Music Marathon may be the most comparable festival to South by Southwest, but it’s not a fair comparison to either. The acts playing the week-long NYC extravaganza generally fall further under the radar, and the showcases, spread across 80 venues throughout the city, requires more prep and yields less serendipity than Austin’s flagship fest.

And yet, much of CMJ can be considered a preview of SXSW – the young bands generating the most buzz come March. It’s also a fairly strong calculation of the local bands that are making headway beyond Texas.

This year featured a gluttony of ATX talent in both official and unofficial shows, from teen standouts Residual Kid to Jon Dee Graham. Austin Psych Fest curated a showcase at Williamsburg’s new Rough Trade record shop, with A Place to Bury Strangers headlining. 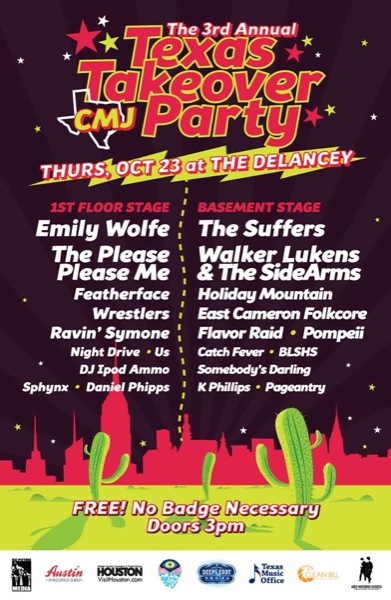 The best showcase of Austin talent arrived Thursday night in a Texas Takeover at the Delancey, two small stages split between the basement and first floor. Houston’s Featherface proved an unexpected highlight, the long-haired quartet bounding through an inspired and lackadaisical glam-pop set reminiscent of Harlem, including a rocked out version of ABBA’s “Fernando.” Austin’s Holiday Mountain and East Cameron Folkcore both represented well to packed crowds downstairs, the latter cramming eight players onstage and letting loose the anthemic blast of full-throated howls and stomps “Robin Hoods Rise,” “Sallie Mae,” and songs from an album due next year.

Local fourpiece the Please Please Me fared less well, never quite getting the right pitch or harmonies between Jessie Torrisi and Alissa McClure despite some moments of solid guitar riffs. Walker Lukens, meanwhile, continued to confound compellingly, going from roots rockers with his quintet the SideArms to motor-mouthed, beatbox percussion, and a looped-out dance party. He’s all over the rails stylistically, but somehow manages to not have the wheels fall off.

Emily Wolfe had received a great deal of beyond-Austin hype leading into her headlining set upstairs, and earned the accolades with a quintet that thrust a full-on choogling rhythm without burying the appeal of her songwriting. Wolfe’s emerged as a provocative rising talent and, already accepted for SXSW 2015, will likely bring a slew of attention in March.

Austinites held court prominently across CMJ, including OBN IIIs destroying a full house at Baby’s All Right in Williamsburg, thrashing out a blister of guitars and badgering the audience into ear-ringing submission. John Wesley Coleman ripped the KXLU and Burger Records party at Death by Audio, and crashed the mosh pit for Reigning Sound Wednesday night at the Knitting Factory.

Capstone to the Music Marathon was Slowdive’s return Saturday night at the multi-story Terminal 5 in Manhattan. The seminal Nineties shoegazers turned in a 90-minute set that stood up to the reunion expectations, with Neil Halstead and Rachel Goswell both in peak form as they buried themselves in the lulling wall of reverb.

Rolling through the enveloping wash of sound, the UK quintet delivered “Machine Gun,” “Souvlaki Space Station,” and the gorgeous “Blue Skied an’ Clear.” The closing run then transcended with “She Calls,” “Dagger,” and “Alison,” as well as their recent reunion staple of Syd Barrett’s “Golden Hair.” The band encored with the slow extended blur of “Rutti” and closed with a stellar “40 Days.”