After Friday night’s swirling vortex of cosmic death from Portal, fellow Antipodeans King Parrot proved the kind of metal act that would slap Watain on the back and tell them to cheer up. Endlessly cheerful screamer Youngy and his band of broadly grinning miscreants could do for grind what Anthrax managed for early thrash: melding absurd good humor to the aggression.

Never one to be shy, Youngy disappeared into the pit, called an audible, and dared the audience to smash into him as hard as they could. Onstage, the rest of the Melbourne demolition crew – which dresses like it just came off a day shift on the construction site – lays down suppressing fire of hyper-speed slamdance material.

After a gut-slitting “Shit on the Liver,” Youngy vaulted the barricade and sprinted, laughing, to man his own merch table. Now that’s a work ethic. As the bald-pated Australian signed autographs, shook hands, and counted out change, Cali sonic distorter Author & Punisher (Tristan Shone) finished ... well, tuning up is the wrong word. 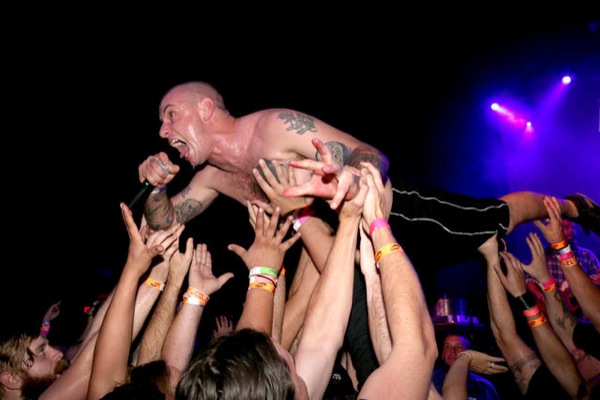 Legend has it that, when Brian Eno turned up to audition for Roxy Music, they asked him to bring in his gear and he showed them a van full of electronics needing transport. Shone would probably just show up with a junk yard. His handcrafted/welded/bolted machinery blurs the line between music and engineering, a natural progression from Einstürzende Neubauten’s earliest destructive tendencies smelted with Swans’ cosmic soar.

Put simply, there aren’t many performers that need to secure their instruments to a work table with g-clamps.

The sounds Shone makes could be done with midi controllers, but that’s hardly the point. It’s the physicality that creates performance, slamming a pick-slathered lathe head to create a beat, or hammering down a massive, two-handed power switch to distort both the walls of white noise and the disturbing, protean images projected behind him. Even his voice is a tool, but not for lyrics. His growls into a mouth piece, part vintage Shure mic, part Jigsaw’s face-ripping bear trap, add a human touch to the rending air. Yet this wasn’t a repetition of Friday’s disappointing Voivod show, when time had clearly stood tragically still for the Canadian thrash pioneers. Graham’s exit reveals Neurosis in full stage light as a grinding, sand-blasting behemoth. The split vocal duties between guitarists Scott Kelly (deeper, doomier) and Steve von Till (rasping, simmering, seething) add textures and personality that the monolith had previously eschewed. And with Graham’s visual gone, it’s clear Noah Landis’ samples and synths are pivotal to the whole towering structure. As their hour roared to an end on waves of distortion, his clashes and caresses over drum avalanche Jason Roeder’s merciless torrent reiterated just how ahead of the curve Neurosis was in hiring him two decades ago. Back then, post-Whitesnake, keyboards were verboten in metal.

Now, they’re a standard part of any pioneer’s arsenal. Thank Neurosis for making them heavy again. They can still shock and scour.