Ringworm murders most bands. The Cleveland quartet’s lights-out hardcore hits so hard it crushed the clock 25 years as if fist-kissed by Iron Mike Tyson. James “Human Furnace” Bulloch has thickened a bit, but his baited bear bellow withers all notions of age. Latest anvil Hammer of the Witch dropped its title track alongside the one from catalog heavyweight Justice Replaced by Revenge and its uppercut “No One Dies Alone.” In just over a year, Poland’s uncontested death trinity has miraculously graced Central Texas. Elder statesmen Vader ramrodded a garage-sized version of Judas Priest in Sa(ta)n An(tonio) early last fall, Behemoth unleashed The Satanist at Emo’s in April, and Decapitated completed the trifecta in 37 minutes flat yesterday at HHFF. In fact, no sooner had the last hammer fall of Ringworm sounded than band founder/shredder Wacław “Vogg” Kiełtyka was onstage tuning.

By then, the largest outdoor audience of the festival had assembled shoulder to shoulder eight deep in front of the stage – the shadow zone from the blazing, 3pm star in the sky. If even one of them left during the ensuing firing squad, they did it on their belly so no one would witness it. Headbanging remains a personal choice at any show, but when it’s done indiscriminately by men and women of varying ages dotting the crowd with secret smiles, sheer reflex rumps optional behavior. Few extremists want to follow that, but 29 years in, Chicago’s Macabre doubtlessly fears no musician – not when riffing almost exclusively on serial killers. That front morbosidad Lance Lencioni should have Paul Giamatti double for him in the reenactment scenes of a future band documentary only feeds into his crimes-against-humanity introduction to the songs.

“This one’s off Dahmer,” he grinned.

Such should suffice without ensuing detail, but the guitarist’s reveal that his mother drove him to a front-and-center seat at the killer’s day in court explained all. “Nightstalker,” “Nero Inferno,” a rude, crude cover of Venom’s “Countess Bathory” – Macabre’s raw death metal emanated literally. 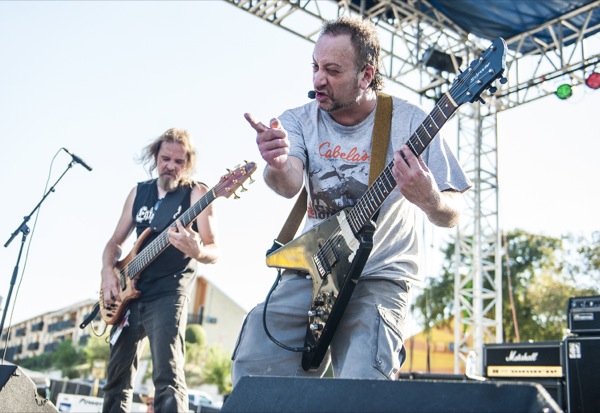 That left only the UK hippie grind of Napalm Death, whose singer Mark “Barney” Greenway still looks like an accountant in short pants while raging about end times. Preaching freedom from religion, sexual liberation, and environmentalism, the frontman sounded violent revolt as guitar/bass/drums behind him rammed together tectonic plates of grind. At the intersection of banshee metal and Austin urbanity, he paused on the elevated stage to scan the skyline. 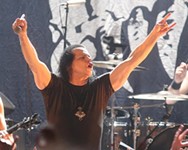